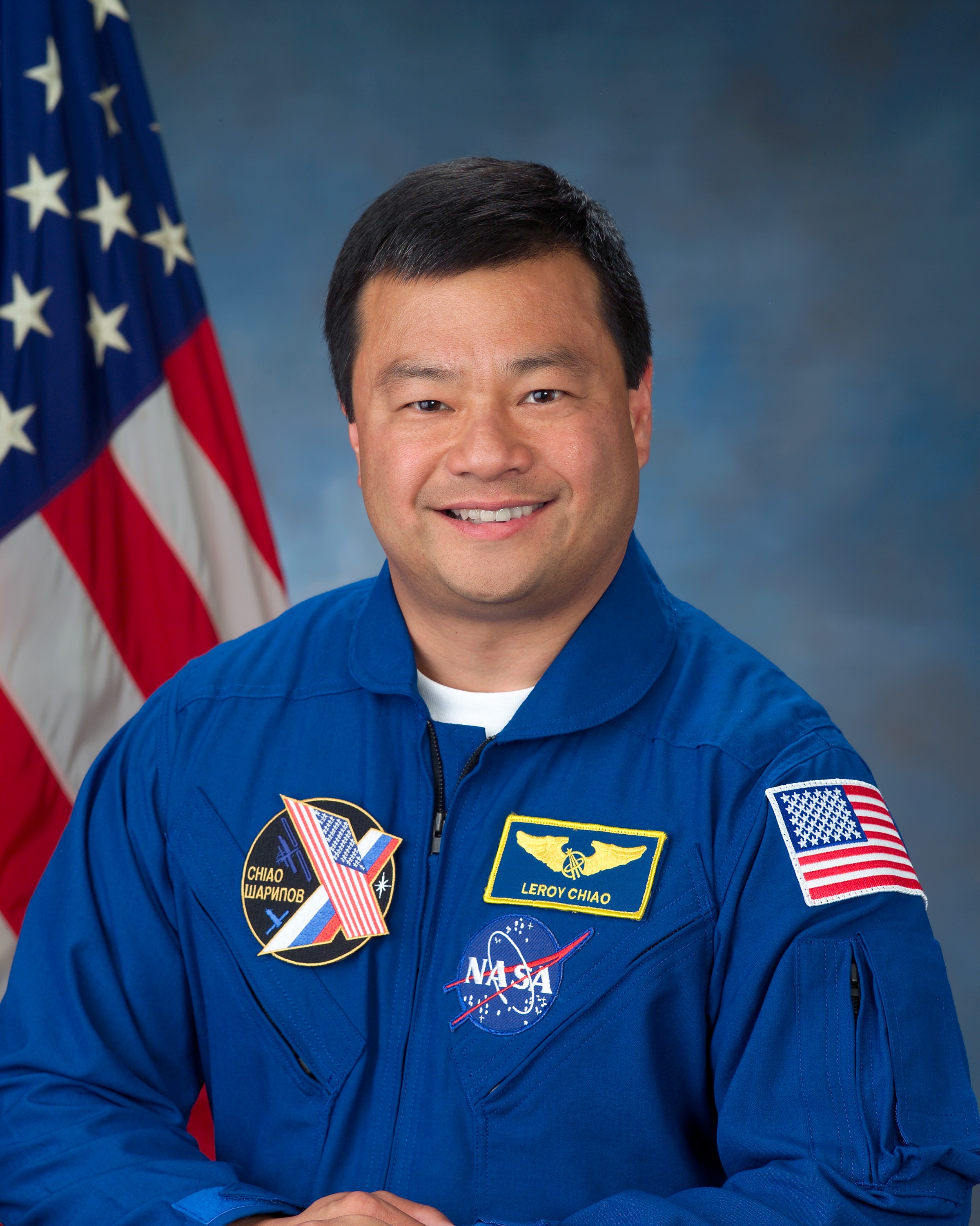 Chiao was born in Milwaukee, and raised in Danville, . Chiao graduated from in Danville in 1978. In 1983 he received a bachelor of science degree in from the , where he was a member of the fraternity. He earned a master of science degree and then a doctorate in chemical engineering from the in 1985 and 1987, respectively.

Chiao’s father (Shane Chiao) grew up in Shandong Province in China; his mother, Dr. Craig Carc, came from .Fact|date=October 2008 After World War II, both fled to Taiwan, where they met and married. His parents immigrated to the United States in the 1950’s. In an interview with a reporter from the China Daily newspaper, Chiao revealed that his radio call name in space is "Shandong," from the name of the province in China where he still has family members.Fact|date=October 2008

Upon graduation, Chiao worked at Hexcel Corporation in from 1987 to 1989. He was involved in process, manufacturing and engineering research on advanced materials, and worked on a joint NASA-/Hexcel project to develop a practical, optically correct, precision segment reflector made entirely of advanced polymer composite materials for future space telescopes, as well as working on cure modeling and finite element analysis. In January 1989, Chiao joined the in , where he was involved in processing research for fabrication of filament-wound and thick-section aerospace composites. Chiao also developed and demonstrated a mechanistic cure model for graphite fiber/ (see ). An instrument-rated pilot, Chiao has logged over 2500 flight hours in a variety of aircraft.

Selected by NASA in January 1990, Chiao became an astronaut in July 1991. He is qualified for flight assignment as a mission specialist. His technical assignments to date include: flight verification in the Shuttle Avionics Integration Laboratory (SAIL); crew equipment, , Spacehab and payloads issues for the Astronaut Office Mission Development Branch; Training and Flight Data File issues; and (EVA) issues for the EVA Branch. Chiao also served as Chief of the Astronaut Office EVA Branch.

In addition to being fluent in Mandarin, Chiao learned Russian as part of the International Space Station program. On , Chiao voted in the 2004 United States presidential election from aboard the International Space Station, making him the first American to vote in a presidential election while in space. McDonald’s presented Chiao with a Big Mac and French Fries at their branch in Star City as one of his first meals since returning to Earth after his ISS assignment.

Chiao was the inadvertent developer of the procedure to use the IRED (Interim Resistive Exercise Device) to excite the solar arrays of the ISS. During an exercise session of squats on the ISS, Chiao sent a vibration through the space station that caused the solar arrays to ripple - a low amplitude frequency response. When Chiao did this, the response from Mission Control was "knock it off." However, several years later during an ISS assembly flight in December 2006 (STS-116), German astronaut Thomas Reiter of the European Space Agency was told to do 30 seconds of robust exercise on the bungee-bar IRED machine to help retract ISS solar arrays, specifically to relieve tension in a wire system that was preventing the array from folding up like an accordion. An eventual unplanned spacewalk during the same shuttle mission managed to finally retract the array.

Chiao left NASA in December of 2005 to pursue employment in the private sector.

STS-65 Columbia (&ndash;, ) launched from and returned to land at the Kennedy Space Center, Florida, setting a new flight duration record for the Space Shuttle program at that time. The STS-65 mission flew the second International Microgravity Laboratory (IML-2). During the 15-day flight the seven-member crew conducted more than 80 experiments focusing on materials and life sciences research in microgravity. The STS-65 mission was accomplished in 236 orbits of the Earth, traveling 6.1 million miles in 353 hours and 55 minutes.

STS-72 Endeavour (&ndash;, ) was a nine-day mission during which the crew retrieved the Space Flyer Unit (launched from Japan ten months earlier), and deployed and retrieved the OAST-Flyer. Chiao performed two spacewalks designed to demonstrate tools and hardware, and evaluate techniques to be used in the assembly of the International Space Station. In completing this mission, Chiao logged a total of 214 hours and 41 seconds in space, including just over thirteen EVA hours, and traveled 3.7 million miles in 142 orbits of the Earth.

STS-92 Discovery (&ndash;, ) was launched from the Kennedy Space Center, Florida and returned to land at , California. During the 13-day flight, the seven member crew attached the Z1 Truss and Pressurized Mating Adapter 3 to the International Space Station using Discovery’s robotic arm and performed four space walks to configure these elements. This expansion of the ISS opened the door for future assembly missions and prepared the station for its first resident crew. Chiao totaled 13 hours and 16 minutes of EVA time in two space walks. The STS-92 mission was accomplished in 202 orbits, traveling 5.3 million miles in 12 days, 21 hours, 40 minutes and 25 seconds.

* NASA Distinguished Service Medal (2004).
* Recipient of four s (2004, 2000, 1996, 1994).
* Four NASA Individual Achievement Awards (2004, 2003, 2002, 2001).
* NASA Going the Extra Mile Award (2004).
* Recipient of the 2003 Excellence Award in Science and Technology, from the US Pan Asian American Chamber of Commerce.
* Recipient of the 100 Most Influential Asian Americans in the 1990¹s Award from A-Magazine (2000).
* Two NASA Exceptional Service Awards (2000, 1996).
* Keynote Commencement Speaker for the Departments of Engineering at the University of California at Berkeley, and at Santa Barbara, in 1996.
* Two NASA Group Achievement Awards (1997, 1995).
* Recipient of Distinguished Alumni Award from University of California, Santa Barbara (1995).
* Recipient of numerous Federation Aeronautique Internationale awards, including the Korolev Diploma (2002), Komarov Diploma (1996) and De La Vaulx Medal (1994).
* Recipient of two awards - the Taylor A. Borradaile National Alumnus of the Year Award (1996) and the Nu Chapter Alumnus of the Year (1991) award.
* Listed in Who's Who in Science and Engineering (1990).
* Invited contributor to the International Encyclopedia of Composite Materials (1989).
* Invited to give technical seminars on material and bonded panels, as well as cure modeling of aerospace composite materials, at the Beijing Institute of Aeronautical Materials, and at the Changsha Institute of Technology, 5th Department, in the .

After leaving NASA, Chiao has become involved in entrepreneurial business ventures in both the U.S. and China.

In early 2006, he joined the Atlanta firm of SpaceWorks Engineering, Inc. (SEI) as an affiliate and technical advisor (on a non-exclusive basis). Dr. Chiao assists the firm on space technologies and operating processes for future space exploration concepts and research on the commercialization of space.

In March 2006, Chiao began an appointment in the Mechanical Engineering Department at the as the first Raborn Distinguished Chair Professor.

Chiao is also currently serving as the Chairman of the National Space Biomedical Research Institute (NSBRI) User Panel, which is attached to the Baylor College of Medicine.

In July 2007, Chiao joined an expedition to visit and conduct 5 days of webcasts and other instructional activities spanning the period of 16-20 July 2007.

Chiao married Karen Chiao in 2003. He enjoys flying his aircraft, as well as downhill skiing. He speaks Mandarin Chinese and Russian.