The Natterjack Toad (Epidalea calamita, formerly Bufo calamita) is a toad native to sandy and heathland areas of Europe. Adults are 60–70 mm in length and are distinguished from Common Toads by a yellow line down the middle of the back. They have relatively short legs, and this gives them a distinctive gait, contrasting with the hopping movement of many other toad species.

Natterjacks have a very loud and distinctive mating call, amplified by the single vocal sac found under the chin of the male animal.

A slightly older Natterjack, though still not fully grown

Natterjacks live for up to 15 years and feed on insects, worms and small reptiles. At night they move around open terrain with sparse vegetation, and in loose sand their tracks can often be seen. They move considerable distances each night, enabling the species to colonize new habitats very quickly.

The Natterjack Toad spawns between the end of April and July, laying 'strings' of eggs in shallow, warm pools. Because the Natterjack Toad is often present in low numbers, its loud mating calls are important so that the sexes can find each other.

For Natterjacks, pools need to have a very slight slope with sparse vegetation on the banks and in the water. As such pools are often temporary, sometimes the larvae die when the pools dry out. The Natterjack compensates for that risk by mating a few times each summer. Thus, the age of the juveniles can vary from a month to 3 months in September. It appears that the early breeders are not the same individuals as the toads that reproduce later in the season. 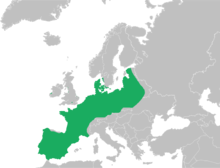 Distribution of the Natterjack Toad

Populations of the toad extend through seventeen European countries.[2] In the British Isles the toad is almost completely confined to coastal sites. In mainland Europe, particularly in the southern part of its range, it lives inland in a variety of habitats.

The Natterjack Toad is the only species of toad native to Ireland. It is found on the Dingle peninsula in County Kerry and also in County Wexford where it was introduced to a dune site.[3] [2] It has also been sighted in a few secluded ponds on lambs head.

In England the toad's sand-dune habitat is protected by several National Nature Reserves (Ainsdale[4], North Walney, Sandscale Haws). In Scotland, where the species is confined to the Solway Firth, there is a reserve at Caerlaverock. In Wales the species became extinct in the twentieth century, but has been reintroduced.[5]

To reverse habitat loss the National Parks and Wildlife Service has created ponds for the species with some funding from the Heritage Council.[2][6]