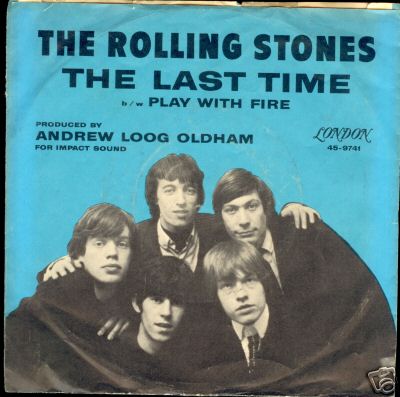 
"The Last Time" is a song by the British rock 'n roll band . This was the first Rolling Stones single written by Mick Jagger and Keith Richards to reach # 1 in the .

"The Last Time" was recorded in Los Angeles in early 1965 with the assistance of , whose producing style can be heard throughout the track. Released in early , "The Last Time" reached # 1 in the U.K. and # 9 in the U.S. It is rumored that invented the main guitar riff of the song (which repeats throughout the song - one of the first pop songs to do this). A performance of this song by the Stones is one of the few recordings from the early years of the popular British music television show "" to still exist, and is therefore often shown on nostalgia shows in the UK (most early TOTP performances have long been wiped).

Although the song is credited to and , it is thought to be heavily based on a traditional gospel song called "This May Be The Last Time" first recorded by in 1955.

In 1997, former Rolling Stones manager sued English rock band for using a sample of recording of "The Last Time" in their hit song "". While the Verve had worked out an agreement to use the sample, Oldham successfully argued that the band used more than the amount they had legally agreed upon. This led to suing the Verve on behalf of his , which owns the rights to all Stones material from the 1960s. Before the suit could reach courts, the Verve settled out of court, eventually relinquishing all writing credits to Jagger and Richards, even though they didn't write one line of verse. [ [http://www.superswell.com/samplelaw/horror.html The Verve and The Rolling Stones : Truly Bittersweet] ]

A fan favorite and popular song in the Stones' canon, it was only performed live during its inception on the 1965-67 tours. It was left off the band's setlists thereafter until being dusted off for the 1997-98 .