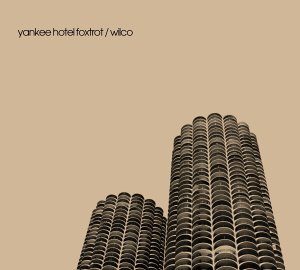 After their dismissal from Reprise, Wilco offered the entire album for free on their official website. In November 2001, Wilco signed with , and the album was officially released on April 23, 2002. It was the first Wilco album with producer Jim O'Rourke and drummer , and the last with multi-instrumentalist and drummer . "Yankee Hotel Foxtrot" was a critical and commercial success, selling over 500,000 copies in the U.S. and topping the critics' poll for 2002.

was touring to promote "" in May 2000 when was invited to play at the Noise Pop festival in Chicago. The festival promoter offered to pair Tweedy with a collaborator of his choosing, and Tweedy decided to perform with Jim O'Rourke. Tweedy frequently played O'Rourke's album "Bad Timing" in his car while he traveled during the previous winter. O'Rourke was an accomplished producer as well as a musician, and had produced over two hundred albums by the time that Tweedy requested the collaboration. O'Rourke offered the services of drummer , and the trio performed at for the festival on May 14, 2000. Tweedy enjoyed the performance so much that he suggested that the trio record an album together. They chose the name , and recorded six songs during the following summer. [Harvnb|Kot|2004|Ref=CITEREFKot2004|p= 176-184]

Wilco began performing songs that would later appear on "Yankee Hotel Foxtrot" during the support tour for "Mermaid Avenue Vol. II". By the end of the year, the band had recorded enough demo tracks to release a fourth studio album (the working title was "Here Comes Everybody"), but Tweedy was unhappy with some of the songs. He wanted the next album to sound like the music he had performed with Loose Fur, and decided to bring Glenn Kotche into the studio to record with the band. Wilco officially replaced drummer with Kotche in January 2001, a decision originally made by Tweedy and later approved by the rest of the band. [Kot 2004, p. 185-188]

sought to engineer and mix the entire album, and this decision caused tension between him and Tweedy. One of the more prominent conflicts (due to its inclusion in the film "I Am Trying to Break Your Heart") was over the ten-second transition between "Ashes of American Flags" and "Heavy Metal Drummer". Bennett explained to Tweedy that there was a mixing problem with the transition, but Tweedy explained that he just wanted the problem fixed. Tweedy then left the recording studio to vomit (due to one of Tweedy's chronic s), and Bennett was offended by Tweedy's sudden departure. Bennett focused on making the songs on the album accessible, while Tweedy wanted the album to cover new musical ground and believed that the songs should be part of a sequence. In order to achieve his musical goals, Tweedy invited Jim O'Rourke into the studio to mix "I Am Trying to Break Your Heart" (audio|I Am Trying to Break Your Heart.ogg|sample), and the results impressed the band members. O'Rourke was then asked to mix the rest of the album.

The cover of the album is a picture of in the band's adopted hometown of . The album was named after a series of letters in the phonetic alphabet that Tweedy had heard on the Irdial box set "". On the fourth track of the album, audio|Tcp d1 4 phonetic alphabet nato irdial.ogg|"Phonetic Alphabet - Nato", a woman repeats the words "Yankee Hotel Foxtrot" numerous times; a clip from this song was placed in the "Yankee Hotel Foxtrot" song "Poor Places". Irdial sued Wilco for , and a settlement was reached out of court. [cite news|last=Gupta|first=Jaya|url=http://www.filter-mag.com/news/interior.1477.html|title=Wilco Settle Lawsuit|publisher=|date=June 25, 2004]

Bennett wanted parts of his mixing material to appear on every track, and this caused conflict between him and O'Rourke. O'Rourke put an emphasis on theme and melodies and reduced the amount of non-melodic noise on the album. He mixed out parts of other band members, particularly on "Poor Places". By the time O'Rourke had finished mixing that song, in one section, only the Loose Fur trio was playing on it. After the album's completion, Tweedy decided to kick Bennett out of the band in favor of O'Rourke. The album was completed in 2001, and Tweedy firmly believed that it was complete.

"I Am Trying to Break Your Heart"

In 2001, merged with to form AOL Time Warner. Time Warner's market share of the music industry had dropped by almost five percent from the mid-1990s, and the new executives ordered the termination of six hundred jobs. One of those jobs was president Howie Klein, who had been a big supporter of Wilco on the label. Klein's dismissal caused head A&R representative to be in charge of deciding whether to release "Yankee Hotel Foxtrot". Kahne assigned A&R representative Mio Vukovic to monitor the progress of the album. Vukovic was unhappy about the album because he felt that his suggestions were not being considered. Kahne wanted a radio single from the album, but he felt that none of the songs were suitable for commercial release. In June 2001, the album was officially rejected and Vukovic suggested that the band independently release the album. [Kot 2004, p. 201-206]

Josh Grier, Wilco's lawyer, was able to negotiate a buy-out of the band from Reprise. The band would keep the rights to the album if they paid Reprise $50,000. Before Wilco could accept the deal, Reprise called the band and changed their offer to give the band the rights to "Yankee Hotel Foxtrot" for free. Despite Reprise's efforts to accommodate Wilco's departure, the process marred public relations after an article in the "" described what had happened. [cite news|last=Kot|first=Greg|url=http://web.archive.org/web/20010826133635/www.chicagotribune.com/features/lifestyle/chi-0108150038aug15.story?coll=chi-leisure-hed|title=Wilco's shot in the arm|publisher=|date=August 15, 2001]

Wilco had planned on releasing "Yankee Hotel Foxtrot" on September 11, 2001, but Tweedy did not want a change in record labels to significantly delay the release of the album. Within weeks of being released from the label and Jay Bennett leaving the band, MP3s of all tracks from the album began to appear on file sharing networks. In a decision aimed at discouraging the pirating of lower quality MP3s and having some control over how the album was distributed, on September 18, 2001, Wilco began streaming the entirety of the album on their official website. The wilcoworld.net website registered over fifty thousand hits that day, eight times as much as typical daily traffic. Traffic to the website quadrupled the normal traffic over the next few months. The following tour was a success financially, and members of Wilco observed that fans sang along with unreleased songs on the album. [Kot 2004, p. 223-226]

Both independent and major record labels bid for the right to release "Yankee Hotel Foxtrot", including and . Tweedy denied the bids of record labels that did not have a roster of signed artists that matched his liking. He also decided to ignore small independent companies because he wanted to be able to put the album out for a large audience and felt that they would be unable to produce more than 100,000 records. Wilco decided to sign with AOL Time Warner subsidiary Nonesuch Records in November 2001, basing the decision on the label's small size and artist-friendly atmosphere. Wilco recorded and produced "Yankee Hotel Foxtrot" with Reprise, received the rights to the album for free, and then sold it back to a different AOL Time Warner affiliate.

The "" EP (also called "Bridge" and "Australian" EP) was originally released as a bonus disc to the Australian version of "Yankee Hotel Foxtrot". The EP comprised six songs that were recorded but not released during the "Yankee Hotel Foxtrot" sessions including a re-working of "Kamera". On the one-year anniversary of the release of "Yankee Hotel Foxtrot", Wilco uploaded the EP onto their official website, and offered it for free to anyone who purchased the album. The band would later allow anyone to download the EP for free off the website, regardless of whether they had purchased the full-length album. [Kot 2004, p. 237] [cite news|last=Unterberger|first=Andrew|url=http://www.stylusmagazine.com/reviews/wilco/more-like-the-moon-ep.htm|title=Wilco - More Like the Moon EP - Review|publisher=|date=September 1, 2003]

Jeff Tweedy (vocals, guitar), Jay Bennett (guitar, keyboards), (bass guitar), and Ken Coomer were responsible for the conception of the album. and provided additional instrumentation. Coomer is listed as a "collaborator", since his drum parts were replaced by those of Glenn Kotche. Bennett, Jim O'Rourke, and Chris Brickley provided engineering and mixing and Steve Rooke mastered the tapes. Jim O'Rourke and Wilco were named as the producers of the album, and Sam Jones took the photographs that were used in the insert of the album. ["Yankee Hotel Foxtrot" liner notes.]