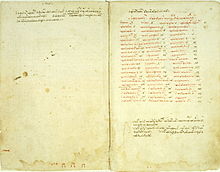 Vaticanus graecus 277, 10v-11r: Table of contents in a fourteenth-century Hippocratic Corpus manuscript. Marcus Fabius Calvus owned this manuscript, transcribed it in his own hand, and used it in the preparation of his 1525 Latin translation.

The Hippocratic Corpus (Latin: Corpus Hippocraticum), or Hippocratic Collection, is a collection of around 60 early Ancient Greek medical works strongly associated with the physician Hippocrates and his teachings. They are, however, varied in content, age and style, and are largely of unknown authorship.

Of the texts in the corpus, none is proven to be by Hippocrates himself.[1] The works of the corpus range from Hippocrates' time and school to many centuries later and rival points of view. Franz Zacharias Ermerins identifies the hands of at least twenty authors in the Hippocratic Corpus.[2] However, the varied works of the corpus have gone under Hippocrates' name since antiquity. The corpus may be the remains of a library of Cos, or a collection compiled in the third century B.C. in Alexandria. It was not, however, only the Coan school of Ancient Greek medicine that contributed to it; the Cnidian did, too.[3][4] Only a fraction of the Hippocratic writings have survived. The lost medical literature is sometimes referred to in the surviving treatises, as at the beginning of Regimen.[5] Some Hippocratic works are known only in translation. "Hippocratic" texts survive in Arabic, Hebrew, Syriac, and Latin.

The majority of the works in the Hippocratic Corpus date from the Classical period, the last decades of the 5th century BC and the first half of the 4th century BC. Among the later works, The Law, On the Heart, On the Physician, and On Sevens are all Hellenistic, while Precepts and On Decorum are from the 1st and 2nd centuries AD.[5]

Some of the earliest works of the corpus (mid-fifth century) are connected to the Cnidian school: On Diseases II-III and the early layer within On the Diseases of Women I-II and On Sterile Women.[6] Prorrhetics I is also mid-fifth century.[6] In the second half of the fifth century, a single author likely produced the treatises On Airs, Waters, Places; Prognostics; Prorrhetics II; and On the Sacred Disease.[6] Other fifth-century works include On Fleshes, Epidemics I and III (ca. 410 BC), On Ancient Medicine, On Regimen in Acute Diseases, and Polybus' On the Nature of Man/Regimen in Health (410-400 BC).[6]

At the end of the fifth or the beginning of the fourth century, one author likely wrote Epidemics II-IV-VI and On the Humors. The coherent group of surgical treatises (On Fractures, On Joints, On Injuries of the Head, Surgery, Mochlicon) is of similar date.[6]

A single fourth-century author probably wrote On Fistulae and On Hemorrhoids.[6]

The Hippocratic Corpus contains textbooks, lectures, research, notes and philosophical essays on various subjects in medicine, in no particular order.[1][10] These works were written for different audiences, both specialists and laymen, and were sometimes written from opposing view points; significant contradictions can be found between works in the Corpus.[11]

One significant portion of the corpus is made up of case histories. Books I and III of Epidemics contain forty-two case histories, of which 60% (25) ended in the patient's death.[12] Nearly all of the diseases described in the Corpus are endemic diseases: colds, consumption, pneumonia, etc.[13]

In several texts of the corpus, the ancient physicians elaborate theories of illness, sometimes grappling with the methodological difficulties that lie in the way of effective and consistent diagnosis and treatment: "One of the great merits of the physicians of the Hippocratic Corpus is that they are not content to practice medicine and to commit their experience to writing, but that they have reflected on their own activity."[14]

While the approaches range from empiricism to a rationalism reminiscent of the physical theories of the Presocratics, these two tendencies can exist side-by-side: "The close association between knowledge and experience is characteristic of the Hippocratics," despite "the Platonic attempt to drive a wedge between the two."[15]

The author of On Ancient Medicine launches immediately into a critique of opponents who posit a single "cause in all cases" of disease, "having laid down as a hypothesis for their account hot or cold or wet or dry or anything else they want."[16] The method put forward in this treatise "could certainly be characterized as an empirical one," preferring the effects of diet as observed by the senses to cosmological speculations, and it was seized upon by Hellenistic Empiricist doctors for this reason.[17] However, "unlike the Empiricists, the author does not claim that the doctor's knowledge is limited to what can be observed by the senses. On the contrary, he requires the doctor to have quite extensive knowledge of aspects of the human constitution that cannot be observed directly, such as the state of the patient's humors and internal organs."[18]

Epistemology and the scientific status of medicine

The author of The Art is at pains to defend the status of medicine as an art (techne), against opponents who (perhaps following Protagoras' critique of expert knowledge[19]) claim it produces no better results against disease than chance (an attack served by the fact that doctors refused to treat the serious and difficult cases they judged to be incurable by their art[20]). The treatise may be considered "the first attempt at general epistemology bequeathed to us by antiquity," although this may only be because we have lost fifth-century rhetorical works that took a similar approach.[21]

Whatever their disagreements, the Hippocratic writers agree in rejecting divine and religious causes and remedies of disease in favor of natural mechanisms. Thus On the Sacred Disease considers that epilepsy (the so-called "sacred" disease) "has a natural cause, and its supposed divine origin is due to men's inexperience and to their wonder at its peculiar character." An exception to this rule is found in Dreams (Regime IV), in which prayers to the gods are prescribed alongside more typically Hippocratic interventions. Though materialistic determinism goes back in Greek thought at least to Leucippus, "One of the greatest virtues of the physicians of the Hippocratic Collection is to have stated, in its most universal form, what was later to be called the principle of determinism. All that occurs has a cause. It is in the treatise of The Art that the most theoretical statement of this principle is to be found: 'Indeed, under a close examination spontaneity disappears; for everything that occurs will be found to do so through something [dia ti].'"[24] In a famous passage of On Ancient Medicine, the author insists on the importance of knowledge of causal explanations: "It is not sufficient to learn simply that cheese is a bad food, as it gives a pain to one who eats a surfeit of it; we must know what the pain is, the reasons for it [dia ti], and which constituent of man is harmfully affected."[24]

The duties of the physician are an object of the Hippocratic writers' attention. A famous maxim (Epidemics I.11) advises: "As to diseases, make a habit of two things—to help, or at least to do no harm."

The most famous work in the Hippocratic Corpus is the Hippocratic Oath, a landmark declaration of medical ethics. The Hippocratic Oath is both philosophical and practical; it not only deals with abstract principles but practical matters such as removing stones and aiding one's teacher financially. It is a complex and probably not the work of one man.[25][26] It remains in use, though rarely in its original form.[26]

The preamble of On the Physician offers "a physical and moral portrait of the ideal physician," and the Precepts also concern the physician's conduct.[27] Treatises such as On Joints and Epidemics VI are concerned with the provision of such "courtesies" as providing a patient with cushions during a procedure,[28] and Decorum includes advice on good manners to be observed in the doctor's office or when visiting patients.

The writing style of the Corpus has been remarked upon for centuries, being described by some as, "clear, precise, and simple".[29] It is often praised for its objectivity and concisesness, yet some have criticised it as being "grave and austere".[30] Francis Adams, a translator of the Corpus, goes further and calls it sometimes “obscure”. Of course, not all of the Corpus is of this “laconic” style, though most of it is. It was Hippocratic practice to write in this style.[31]

The whole corpus is written in Ionic Greek, though the island of Cos was in a region that spoke Doric Greek.

The Art and On Breaths show the influence of Sophistic rhetoric; they "are characterized by long introductions and conclusions, antitheses, anaphoras, and sound effects typical of Gorgianic style." Other works also have rhetorical elements.[32] In general, it can be said that "the Hippocratic physician was also an orator," with his role including public speeches and "verbal wrestling matches."[33]

The entire Hippocratic Corpus was first printed as a unit in 1525. This edition was in Latin and was edited by Marcus Fabius Calvus in Rome. The first complete Greek edition followed the next year from the Aldine Press in Venice. A significant edition was that of Émile Littré who spent twenty-two years (1839–1861) working diligently on a complete Greek edition and French translation of the Hippocratic Corpus. This was scholarly, yet sometimes inaccurate and awkward.[34] Another edition of note was that of Franz Zacharias Ermerins, published in Utrecht between 1859 and 1864.[34] Kühlewein's Teubner edition (1894-1902) "mark[ed] a distinct advance."[34]

Beginning in 1967, an important modern edition by Jacques Jouanna and others began to appear (with Greek text, French translation, and commentary) in the Collection Budé. Other important bilingual annotated editions (with translation in German or French) continue to appear in the Corpus medicorum graecorum published by the Berlin-Brandenburgische Akademie der Wissenschaften.

The first English translation from the Hippocratic Corpus, Peter Lowe's Chirurgerie ("Surgery"), was published in 1597, but a complete English translation of a dozen and a half "genuine" works was not offered in English until Francis Adams' publication of 1849. Other works of the corpus remained untranslated into English until the resumed publication of the Loeb Classical Library edition beginning in 1988.[35] The first four Loeb volumes were published in 1923-1931, and five further volumes appeared between 1988 and 2010. A tenth volume by Ann Ellis Hanson, containing the gynecological treatises, is expected to complete the series.[36][37]