Champús is a drink popular in Peru, Ecuador and southwest Colombia (Departments of Valle del Cauca, Cauca and Nariño), made with maize, fruits such as lulo (also known as naranjilla), pineapple, quince or guanábana, sweetened with panela and seasoned with cinnamon, cloves and orange tree leaves.

In Peru it is drunk warm, and apple, guanábana and quince is used instead of lulo. It is sold in the streets by a champusera, a typical figure of Lima's landscape, generally Afro-Peruvian, who passes down the recipe to younger generations.

In Ecuador it is prepared with maize flour, panela and green leaves from the lemon tree. It is a drink in funeral rites in November or the funerals of adults because the indigenous tradition considers it a favorite of the dead.

In Colombia, crushed maize is used, in addition to panela, lulo, pineapple, cinnamon, cloves and leaves of the orange tree. In the regions of the south, such as the Departments of Nariño and Cauca, it is considered mainly a drink for Christmas. In Nariño it is prepared also with leaves of cedrón and congona. In the Department of Valle del Cauca it is served very cold it is popular at any time.

In some regions of Peru and southern Colombia, the drink is made with mote, cooked maize that makes the champús thicker; in these regions, it is consumed as dessert. 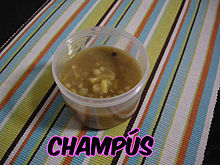