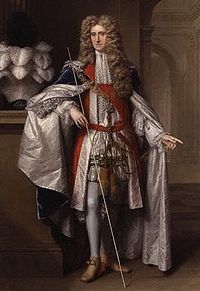 Duke of Leeds was a title in the Peerage of England. It was created in 1694 for the prominent statesman Thomas Osborne, 1st Marquess of Carmarthen. He had already succeeded as 2nd Baronet, of Kiveton, and been created Viscount Osborne, of Dunblane, in 1673, Baron Osborne, of Kiveton in the County of York, and Viscount Latimer, of Danby in the County of York, in 1673, Earl of Danby, in the County of York, in 1674, and Marquess of Carmarthen in 1689. All these titles were in the Peerage of England, except for the viscountcy of Osborne, which was in the Peerage of Scotland.[note 1] He resigned the latter title in favour of his son in 1673. The Earldom of Danby was a revival of the title held by his great-uncle, Henry Danvers, 1st Earl of Danby (see Earl of Danby).

The Dukedom was named for Leeds in Yorkshire, and did not (as is sometimes claimed) refer to Leeds Castle in Kent. The principal ducal seat was Hornby Castle, Yorkshire.