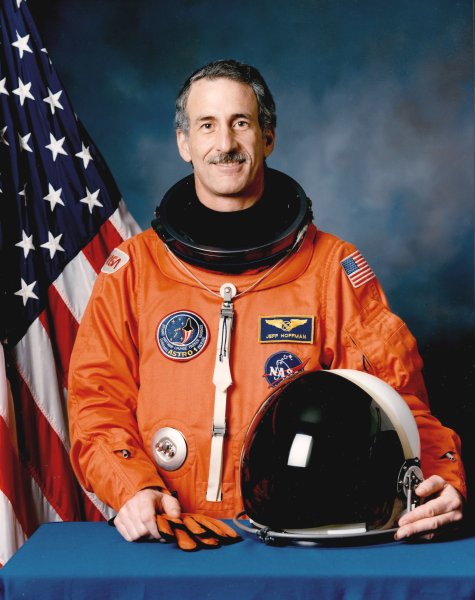 he is currently co-director of the Massachusetts Space Grant Consortium at MIT's Department of Aeronautics and Astronautics.

Hoffman's original research interests were in high-energy astrophysics, specifically and astronomy. His doctoral work at Harvard was the design, construction, testing, and flight of a balloon-borne, low-energy, gamma ray .

From 1972 to 1975, during post-doctoral work at the in the UK, he worked on several x-ray astronomy payloads. He also designed and supervised the construction and testing of the test equipment for use in an x-ray beam facility which he used to measure the scattering and reflectivity properties of x-ray concentrating s. During his last year at Leicester, he was project scientist for the medium-energy x-ray experiment on the 's and played a leading role in the proposal and design studies for this project.

He worked in the at the (MIT) from 1975 to 1978 as project scientist in charge of the orbiting HEAO-1 A4 hard x-ray and gamma ray experiment, launched in August 1977. His involvement included pre-launch design of the data analysis system, supervising its operation post-launch, and directing the MIT team undertaking the scientific analysis of flight data being returned. He was also involved extensively in analysis of x-ray data from the SAS-3 satellite being operated by MIT. His principal research was the study of x-ray bursts, about which he authored or co-authored more than 20 papers.

Selected by NASA in January 1978, Dr. Hoffman became an astronaut in August 1979. During preparations for the Shuttle Orbital Flight Tests, he worked in the Flight Simulation Laboratory at , testing , and flight control systems. He worked with the orbital maneuvering and reaction control systems, with Shuttle navigation, with crew training, and with the development of satellite deployment procedures. Dr. Hoffman served as a support crewmember for and as a CAPCOM (spacecraft communicator) for the and missions. Dr. Hoffman has been the Astronaut Office Payload Safety Representative. He also worked on EVA, including the development of a high-pressure , and preparations for the assembly of the . Dr. Hoffman was a co-founder of the Astronaut Office Science Support Group. In 1996 he led the Payload and Habitability Branch of the Astronaut Office.

Dr. Hoffman left the astronaut program in July 1997 to become NASA's an Representative in , where he served until August 2001. His principle duties were to keep NASA and NASA’s European partners informed about each other’s activities, try to resolve problems in US-European cooperative space projects, search for new areas of US-European space cooperation, and represent NASA in European media. In August 2001, Dr. Hoffman was seconded by NASA to the Massachusetts Institute of Technology, where he is a Professor in the Department of and . He is engaged in several research projects using the and teaches courses on space operations and design.

Dr. Hoffman made his first space flight as a mission specialist on , April 12-19, 1985, on the . On this mission, he made the first STS contingency , in an attempted rescue of a malfunctioning satellite.

Dr. Hoffman made his second space flight as a mission specialist on , December 2-10, 1990, on the . This Spacelab mission featured the ASTRO-1 astronomy laboratory, a project on which Dr. Hoffman had worked since 1982.

Dr. Hoffman made his third space flight as payload commander and mission specialist on , -, , on the . On this mission, the crew deployed the European Retrievable Carrier (EURECA), an ESA-sponsored free-flying science platform, and carried out the first test flight of the Tethered Satellite System (TSS), a joint project between NASA and the . Dr. Hoffman had worked on the Tethered Satellite project since 1987.

Dr. Hoffman made his fourth flight as an EVA crewmember on , December 2-13, 1993, on the . During this flight, the Hubble Space Telescope (HST) was captured, serviced, and restored to full capacity through a record five space walks by four astronauts. Dr. Hoffman also spun a dreidel for the holiday of Chanukah to a live audience watching via satellite watching what's known as Chanukah Live. (Video Courtesy of Chabad of the Space Coast)

Dr. Hoffman last flew on ( - , ) on the . This was a 16-day mission whose principal payloads were the reflight of the Tethered Satellite System (TSS) and the third flight of the United States Payload (USMP-3). The TSS successfully demonstrated the ability of tethers to produce . The TSS experiment produced a wealth of new information on the of tethers and before the tether broke at 19.7 km, just shy of the 20.7 km goal. The crew also worked around the clock performing experiments and research related to USMP-3 microgravity investigations. During this mission, Dr. Hoffman became the first astronaut to log 1000 hours aboard the Space Shuttle.

With the completion of his fifth space flight, Dr. Hoffman has logged more than 1,211 hours and 21.5 million miles in space. He was also the first Jewish man in space.