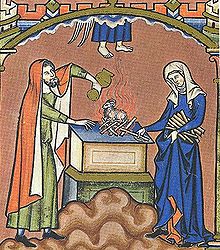 Manoah and his barren wife sacrifice a ram to the angel of the Lord (above); the wife wears a wimple in this miniature painted in Paris, ca 1250 (the Maciejowski Bible).

Manoah was of the tribe of Dan, and lived in the city of Zorah. He and his wife were childless, but an angel of the Lord appeared to Manoah's wife and told her that she would give birth to a son. The child was to be dedicated from the womb as a Nazirite, which entailed restrictions on his diet, which the angel spelled out in detail. The "woman" (for her name was omitted) told her husband “A man of God came to me”, whose countenance was like the angel of God. Manoah prayed again and the angel returned to instruct the both of them. After the angel left, Manoah tells his wife, "We shall surely die, because we have seen God." (Judges 13:22)

Together with his wife he subsequently tried to dissuade Samson from marrying a Philistine woman, but travelled with him to Timnath for the wedding ceremony when they were unable to do so.

The story has special importance for Christians, because of its similarity to the story of the Annunciation to Mary.[further explanation needed]