The rough earth snake (Virginia striatula) is a species of nonvenomous natricine colubrid snake native to the southeastern United States. It was first described by Carolus Linnaeus in 1766, as Coluber striatulus.

It is found from Texas to Florida, and as far north as Missouri and Virginia. 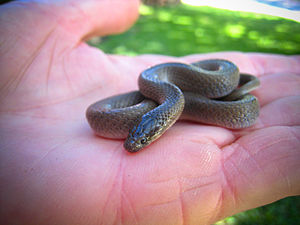 V. striatula found wild in Dallas, TX, USA. In the palm of a hand for size reference.

The rough earth snake is a small, brown, unpatterned snake with lightly keeled scales (which gives it its common name), and a light colored underside. They do not typically grow beyond 10 inches in length, with 7 inches being average. It is easily mistaken for the smooth earth snake, Virginia valeriae, with which it shares range and habitat. The keeled scales of V. striatula are the only way to visually distinguish the species from V. valeriae, which has smooth (non-keeled) scales.

They are a fossorial species, spending most of their time buried in leaf litter, loose soil, or beneath rotting logs or other ground debris. It prefers habitats that are not prone to flooding.

They are ovoviviparous, with young being born in mid-summer. Brood size varies from 3 to 8. Newborns are about 10 cm (4 inches) in total length.

Given their lack of sufficient defense mechanisms against larger animals, earth snakes are generally not aggressive towards humans and are harmless if encountered. While they do have teeth, the size of the mouth and teeth make any strikes against humans superficial at worst. They can defecate as a defense mechanism to make them less palatable to would-be predators. If necessary, they can be safely picked up by hand and relocated.

Their primary diet consists of earthworms and soft-bodied arthropods. Earth snakes eat a wide variety of suitably sized insects and other invertebrates, including snails and slugs, making them a gardener's friend.