Diskworld
Discworld, spelled with a "c", is a series of novels by Terry Pratchett and its fictional setting. 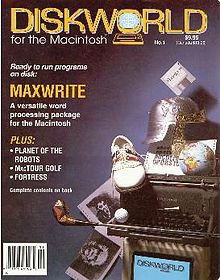 Diskworld (ISSN 0899-4838) was a disk magazine for the Apple Macintosh computer system, published by Softdisk beginning in 1988. It was a sister publication of Softdisk for the Apple II, Loadstar for the Commodore 64, and Big Blue Disk for the IBM PC.

Later, Diskworld was renamed Softdisk for Mac, but it ceased publication by the end of the 1990s along with the other disk magazines published by Softdisk (other than Loadstar, which broke off as an independent company and continued into the 2000s) as the company moved more into Internet development.