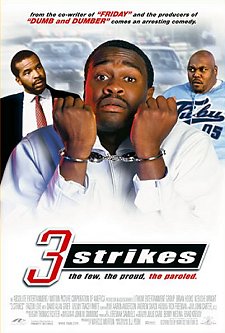 "3 Strikes" is a 2000 , written and directed by . The film stars as Rob Douglas, a man just released from a one year sentence in jail, who already has two strikes to his name. Since he's living under 's , Rob decides to go straight and leave the street life alone. However, things go horribly wrong for him as he gets involved in an altercation with the police upon the day of his release. The plot centers around Rob trying to evade the police until he can prove his innocence, for fear that he will be put away for good with a third strike. , , and co-star.

The film begins with a voice-over narration from the character Rob Douglas (Hooks) introducing himself, and telling a few facts about his life. He talks about his family, his dreams, and how he plans to get his life together, when he gets out of prison, of course. We then see Rob and the other inmates in the cafeteria, watching the local news, which has a government official talking about California's three strikes law, which will put three time offenders in prison for a minimum of twenty-five years. This doesn't please Rob at all, as he's currently finishing his second bid in prison. However, this is Rob's last day inside, so he's not too down about his current situation.

Later that day, Rob makes a call to Tone (Love), his friend from the old neighborhood, and asks him to pick him up when he gets out later. Tone says he will, and heads out to get him. However, while he's on the way, Tone gets caught up with a woman he just met, and tells his friend J.J. () to pick Rob up from the jailhouse for him. Meanwhile, Rob is still in prison, talking boldly to all of the other inmates who've been pushing him around and abusing him the last few years.

When Rob gets out, he's surprised to find J.J. waiting for him instead of Tone, and somewhat reluctantly gets in the car with him to leave. Almost as soon as Rob gets finished telling J.J. how he never plans to go back to prison, the cops pull the two over. When they do, J.J. pulls out a gun and shoots at the cops, starting a major shootout. At this point, J.J. tells Rob that the car is stolen, and Rob, trying to allude his deadly third strike, takes off running. J.J. ends up wounded and detained by the police, while Rob hides out for the night at his girlfriend Juanita's (Wright) house.

The next morning, Rob goes home to see his family. While getting reacquainted with everyone, he sees on TV that the police are still searching for him in connection to the shootout. Later, while eating breakfast, he gets a phone call from Tone, telling him that since he abandoned J.J. during the shootout, he's now on everyone in the hood's most wanted list, including his own. When Rob's father (George Wallace) comes home, the two get into an argument, so Rob packs up some clothes and leaves.

Meanwhile, across town at the 77th Division of the , Detective Jenkins (Grier) is investigating the case and searching for Rob. He talks to Rob's parole officer Mr. Cortino () and tells him to contact him immediately if Rob shows up. Soon after, Rob calls his P.O. to check in, and Cortino tells him he should give himself up before the cops catch him on the streets. While Rob is dealing with his various problems, J.J. is now in sick bay, restricted to a hospital bed due to his injuries. He makes a phone call to his friend Blue (Barima McKnight), and tells him that when the police come and question him about the shootout, he's going to put the blame on Rob. He also mentions that he was the one who had the gun and did the shooting.

Later on that day, Rob runs into his old friend Mike () [It is here we learn how Rob got his second strike] . After they talk, Mike gives Rob some money, since he's currently broke. Rob then calls Juanita and tells her to meet him at a fancy hotel, so they can enjoy a more romantic setting then her house, where her grandfather also resides. While Juanita and Rob are at the hotel, Detective Jenkins and his partner Officer Roberts (Dean Norris) make a stop at Rob's home to try and find him that night.

When Rob calls home the next morning, his mother (Starletta DuPois) tells him the police have been looking for him, and some girl named Dahlia called saying she had some information that could keep him out of jail. After Juanita calls Dahlia's number, thinking she's some other girl Rob's trying to talk to, Dahlia () tells Rob to come to her place for a tape that could get him out of the situation he's in.

Before he goes to Dahlia's, Rob goes to see his friend Mike and asks him if he knows any good lawyers. Mike tells him he will talk to a good one he knows named Libowitz (), then Rob leaves. Before Rob gets to Dahlia's, her and Blue, who's also her boyfriend, get in an argument over the conversation she heard between him and J.J., which is the same one where J.J. admitted to being the one responsible for the freeway shooting. When Rob gets to Dahlia's, she tells him that she'll give him the taped conversation, if she can have her way with him.

While this is going on, Blue goes and tells Tone that Rob is at his house, so Tone and his crew all go to get him. When Rob comes outside, they start to jump him but run away when the cops arrive. Rob is glad to see the police at first, then realizes they are still after him about the shooting. He leads the police on a high speed chase, calling Mike while under pursuit and telling him to bring his lawyer and newscaster Stan Wilson (Bennet Guillory) to the First A.M.E. church, where he will meet them. The police corner Rob and, though he's not armed, begin to fire shots at him after Detective Jenkins falsely claims he has a gun. Rob is able to get away, and again leads the police on a wild chase, this time while on foot. While Rob's on the run, Mike suddenly pulls up, and Rob jumps in his car with him. They are able to dodge the police and get to the church, where Rob gives himself up.

Sometime later at the L.A. County Courthouse, Rob's case is currently under way. In the final verdict, though he doesn't receive his third strike, Rob is sentenced to 30 days in jail for violating his parole. Rob's father tells him he will pick him up from jail himself when he gets out the next time. The film's epilogue states that Rob is eventually released from prison early due to overcrowding.