Peoples Drug was a chain of drug stores based in Alexandria, VA, a suburb of Washington, D.C.. Founded in 1904, Peoples was subsequently purchased by Lane Drug in 1975, Imasco in 1984, and finally by CVS in 1990, which continued to run the stores under the Peoples banner until 1994, at which time the stores were converted to CVS, marking the end of the use of the Peoples Drug name.

Peoples Drug was founded by Malcolm Gibbs in 1904, and by 1930 had 110 stores operating under Peoples Drugs, Days Drug, and Shearer Drug names. There were variations of the name, with Peoples Service Drug, and Gibbs Peoples Drug being most common.

In 1970, Peoples had 252 stores operating in the District of Columbia, Maryland, Virginia, Pennsylvania, Ohio, West Virginia, North Carolina, South Carolina, Florida, New York, and New Jersey. That year there were 5,500 employees, with sales of $220 million and profits of $1.87 million.[1] By 1975, Peoples had grown to 500 stores. Later in the year, the chain was purchased by Lane Drug of Toledo, Ohio.,,[2][3][4] The new company retained the Peoples name, and included Lane Drug, Schuman Drug, Dynamic Drug, Health Mart, Reed Drug, and Lee Drug. Lane president Sheldon "Bud" Fantle took over the presidency of the chain and went to work on improving merchandising and customer service at People's. In 1985, two 35,000-square-foot (3,300 m2) “Bud’s Deep Discount Drug Stores” were opened in the Toledo area, with others in the Washington, D.C. metropolitan area. The name “Bud’s” was derived from the nickname of Sheldon “Bud” Fantle.[5] In January, 1987, Mr. Fantle left Peoples and later took control of troubled Dart Drug in Washington DC, renaming those stores Fantle's. 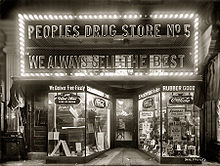 Peoples took control of the Florida Shoppers Drug Mart locations. Peoples soon acquired Rea & Derick and Haag Drug. In 1984, Peoples was acquired by the Canadian conglomerate Imasco, the Canadian arm of British American Tobacco, and owner of Shoppers Drug Mart and Pharmaprix in Canada. Peoples and its divisions had close to 800 stores and became one of the country's leading drug chains.

First to go were the Florida Shoppers Drug Mart stores, sold to Eckerd. Next was the Atlanta based Reed/Lee Drug to Big B Drugs. The 85 store division gave Big B their entrance into the Atlanta market, a goal they had been working on for years. The next sale was Lane drug to Rite Aid, effectve April 11, 1989. The last phase was the Indiana division of Peoples being sold to management, changing the former Peoples stores to Reliable Drugs. Reliable survived only two to three years prior to being bought by Rite Aid.

After the dust settled from the sales, Imasco decided to unload the Peoples Drug chain, as Peoples was not performing at the level Imasco had hoped. In late 1990, CVS Corporation purchased Peoples. CVS kept the Peoples Drug name in place, remodeled most stores to the CVS format and improved the stores' sales. The Peoples name was considered to be too strong a name to change it to CVS/pharmacy immediately. The name did ultimately change in May 1994, just a few months before the Peoples Drug name would have celebrated its 90th anniversary.