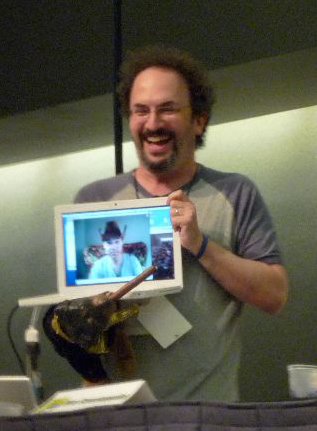 Robert Smigel (born ) is an American , and known for his "" "" cartoon shorts and as the behind . Smigel was once a member of the comedy troupe "All You Can Eat".

Smigel was born in , the son of , , "The Father of Cosmetic Dentistry", [ [http://www.Smigel.com New York Cosmetic Dentistry with Dr. Irwin Smigel ] ] and the founder and president of the . For a time, Smigel followed in his father's footsteps and studied at and ; in the feature film "" (2002), Smigel played a dentist.

Smigel first established himself as a writer on "" by joining the writing staff when Lorne Michaels returned as executive producer for the 1985-1986 season. After the 1985-1986 season proved to be a disappointment with critics, in the ratings, and with (who was planning to have SNL cancelled by the last episode of season 11 due to its sliding ratings), [ [http://snltranscripts.jt.org/85/85r.phtml SNL Transcripts: Anjelica Huston & Billy Martin: 05/24/86 ] ] Lorne fired most of the castmembers and writers, retained the castmembers and writers who were standouts during the otherwise dismal season (Smigel being one of them), and hired new ones for the 1986-1987 season. This is when Smigel began to write more memorable sketches, including one where host urged worshipful attendees at a "" convention to "get a life." Smigel rarely appeared on screen, although he was credited as a feature player in the early 1990s and has played a recurring character in the "" sketches.

While on a writers' strike from "Saturday Night Live" following the 1987–88 season, Smigel wrote for an revue in with fellow "SNL" writers and called "".

Smigel co-wrote "" with for NBC. The pilot never went to series, but it has become a cult hit and has screened live at "The Other Network", a festival of un-aired TV pilots produced by , featuring live and taped intros by Smigel. Smigel later became the first head writer at "", where he created numerous successful comedy bits, including one where Smigel performed only the lips of public figures which were superimposed on photos of the actual people. (This technique was pioneered on the "" cartoon series as a cost-saving measure, and was known as .)

Smigel's most famous creation, however, is the foul-mouthed puppet , who mercilessly mocks celebrities and others in the style of a comedian. Smigel also wrote and performed on the short-lived "Dana Carvey Show".

Smigel continued to establish himself on "Saturday Night Live" by producing infamous, provocative, short animated segments under the title "", which usually satirizes public figures and popular culture. It spawned a TV show on featuring a mix of puppets, animation, and short sketches. Although only eight episodes were aired (during the winter of - ) Smigel continues to create "TV Funhouse" segments for "Saturday Night Live" and occasionally appears in films (usually alongside "SNL" veterans such as ). According to interviews, Smigel helped punch up the scripts for "Little Nicky" and the "". He was also in Wayne's World 2 and played as a Super Nerd in a concert backstage. His contributions were uncredited.

Currently, Smigel is working on an animated sitcom for FOX called "Animals". FOX has not made any official statement regarding the show. Additionally, Smigel played a gay mailman in the Adam Sandler film .

Smigel, along with Adam Sandler and Judd Apatow, wrote the script for the film "". The film was released June 6, 2008. Smigel is also one of the executive producers of the film, which is a first for him despite his frequent collaborations with Sandler.

Smigel has a child with , and is active in raising money for New York-based autism services.

*Carl Wollarski, from ""
*Hank Fielding, a two-time Weekend Update commentator
*One of the Hub's Gyros employees
*'s sidekick in the naked baseball skit.