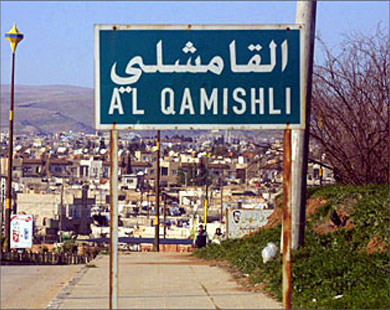 Qamishli (Arabic: القامشلي, Syriac:ܩܡܫܠܝ, ܩܡܫܠܐ or Beth-Zalin ܒܝܬ ܙܠܝܢ, Kurdish: Qamişlo) is a city in northeastern on the border with (city of ) and close to . It belongs to Al Hasakah governorate in the and is the center of an administrative district.

The roots of the name "Qamishli" maybe originally traced to languages spoken in ancient during the Bronze Age, like the name of the Hittite/Mitanni city of Carchemish (KarKamish). The word Qamishli seems to have been Turkicized to mean "with reed".

Al Qamishli, in modern times, is of mixed ethnic groups, predominantly Kurdish [Inheriting Syria: Bashar's Trial by Fire, p 190, Flynt Leverett, 286 pages, published 2005, ISBN 0815752040] , Aramean-Syriacs and Arabs. [ [http://lexicorient.com/e.o/qamishli.htm Qamishli ] ] The of the city who are indigenous to the area mainly consist of Syriacs and . The city's population grew with the arrival of Syriacs fleeing the in modern Fact|date=June 2008 and the city was also founded by Syriac. Today , Syriacs, , and live side by side in the city. The city is populated by around 50.000 inhabitant, while the city and its suburbs and the Qamishli district is inhabited by up to 200.000 Syrians.

Al Qamishli was also home to a significant Jewish community. In the 1930s the Jewish population of Al Qamishli numbered 3000. After 1947 the situation of the Jews of Al Qamishli deteriorated. All Jews employed in government offices were sacked. Many Jewish women were imprisoned and beaten with the approval of the authorities. By the community had dwindled to 800 persons, and after the it went down further to 150. The remaining Jewish community is subjected to a daily curfew at sundown. [ [http://www.omedia.co.il/Show_Article.asp?DynamicContentID=16595&MenuID=813 שכן נאסר עליהם ליצור מגע עם זרים ועליהם לשוב לבתיהם עם שקיעת החמה. "They are forbidden to have contact with foreigners and they must return home by sundown."] ] [ [http://www.nrg.co.il/online/11/ART1/699/252.html Report in Hamodia: יהודי קמישלי מצויים במעצר בית ואינם מורשים לעזוב את העיר, אפילו לצרכי ריפוי דחוף "The Kamishli Jews are under house arrest and are forbidden to leave the town, even for urgent medical reasons."] ] [ [http://www.americanthinker.com/2007/07/recognition_for_the_silent_jew.html American Thinker] ]

Qamishli is situated at the base of the , located near the area of ancient city of which was founded during the fourth millennium BC.

The modern city was founded in 1926 as a railway station on the Taurus railway.

Qamishli is the largest town in Hassake province and it is regarded as the secret capital of the Kurds, the Syriacs also claim it to be their community capital. It is also the centre of the Syrian Kurdish problem. [ [http://www.qantara.de/webcom/show_article.php/_c-476/_nr-800/_p-1/i.html?PHPSESSID=5 Qantara.de - The Kurds of Syria - An Insecure Stone in the Syrian Mosaic ] ]

Still the tension re-occurring and remembered by Kurds every causing curfew and strict control by police in areas were Kurds want to revive the riot memory. In June 2005, thousands of Kurds demonstrated in Qamishli to protest Sheikh Khaznawi's assassination, a welknown Kurdish cleric in Syria, which resulted in killing of one policeman and four Kurds injured. [ [http://www.usatoday.com/news/world/2005-06-15-syria-kurds_x.htm USATODAY.com - A murder stirs Kurds in Syria ] ] [ [http://www.nytimes.com/2005/07/02/international/middleeast/02kurds.html Kurds, Emboldened by Lebanon, Rise Up in Tense Syria - New York Times ] ] . In March 2008, according to Fact|date=June 2008, Syrian security forces opened fire at Kurds celebrating spring festival of Newroz and gathering for reviving the 2004 riot in Qamishli. The shooting left three people dead.

The city is renowned for throwing a large Christmas parade every year in December, and celebrating Newroz festival by a large crowd every year in March.

Al Qamishli has recently experienced an economic boom due to the exploration of petroleum in the region 80 km east of Al Qamishli. Fact|date=June 2008

It has an international airport, , with IATA code KAC.