The Danish West India and Guinea Company settled on St. Thomas island first in 1672, expanding to St. John in 1683 (a move disputed with the British until 1718), and purchasing St. Croix from the French West Indies Company in 1733. In 1754, the islands were sold to the Danish king, Frederick V of Denmark, becoming royal Danish colonies.

At times during the Napoleonic Wars, the islands were occupied by the British; first from March 1801 to March 27, 1802, and then again from December 1807 to November 20, 1815, when they were returned to Denmark. 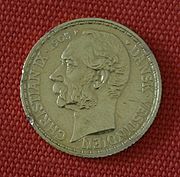 In the 1850s Danish West Indies had a total population of about 41,000 people. The government of the islands were under a governor-general, whose jurisdiction extends to the other Danish colonies of the group, however, because the islands formerly belonged to Great Britain consequently the inhabitants were English in customs and in language. The islands of that period consisted of[2]:

Christiansted, the main town of St. Croix in the former Danish West Indies

The United States had been interested in the islands for years because of their strategic position near the approach to the Panama Canal and because of the fear that Germany might seize them to use as U-boat bases during World War I. 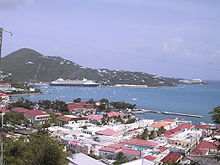