When You Say Nothing at All

When You Say Nothing at All

Infobox Single
Name = When You Say Nothing at All

Overstreet and Schlitz came up with "When You Say Nothing at All" at the end of an otherwise unproductive day. Strumming a guitar, trying to write their next song, they were coming up empty. "As we tried to find another way to say nothing, we came up with the song," Overstreet later told author Ace Collins. They thought the song was OK, but nothing special.

When Keith Whitley heard it, he loved it, and was not going to let it get away.

RCA released "When You Say Nothing at All" as the follow-up single to the title song of Whitley's "Don't Close Your Eyes" album. The former song already had hit No. 1 on the "Billboard" Hot Country Singles chart, his first chart-topper after three prior singles made the top 10.

It was the second of five consecutive chart-topping singles for Whitley, who did not live to see the last two, as he died on , of alcohol poisoning.

"Keith did a great job singin' that song," co-composer Schlitz told author Tom Roland. "He truly sang it from the heart."

Krauss, already a veteran bluegrass fiddler and vocalist at age 23, recorded "When You Say Nothing at All" with her group, Union Station, in 1994 for a tribute album to Whitley. After the song began to receive unsolicited airplay, BNA Records, the label that had released the album, issued Krauss' version to radio in January 1995. [cite news |last=Horak |first=Terri |title=Rounder Goes All Out for Grammy-Nominated Krauss |publisher=Billboard |date= Accessed via ProQuest.]

While Krauss' version was on the charts, Mike Cromwell, then the production director at in , concocted a duet merging elements of Krauss' version with Whitley's original hit version. The "duet" garnered national attention, and it spread from at least to Albuquerque. [cite news |last=Cave |first=Kathy |title=Whitley, Krauss blend grabs national attention |page=B8 |publisher=Milwaukee Journal Sentinel |date= Accessed via ProQuest.] It was never officially serviced to radio and has never been available commercially.

Krauss' recording won the 1995 CMA award for "Single of the Year".

Infobox Single
Name = When You Say Nothing at All 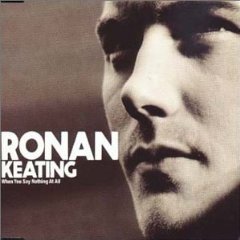 "When You Say Nothing at All" was Keating's first solo single outside the confines of popular Irish group . He recorded it in 1999 for the of the film "Notting Hill". The song would also appear on Keating's solo debut album "Ronan" the following year.

Keating's version of "When You Say Nothing at All" was released as a single in the third quarter of 1999 and reached number one on the UK chart. It also reached the top position in Ireland. In the UK, the single was certified gold.

In 2003, he re-recorded the single as a duet with Mexican singer , which was released in Mexico and Latin America to promote a hits compilation.

Steven McLachlan, a Scottish singer, recorded "When You Say Nothing at All" in 2003. As a digital download, it stayed at No. 1 on the Australian Country-Pop Digital Charts for six months.

Comedy band the did a version of this song called "(When You Wear) Nothing At All".