Examination of conscience is a review of one's past thoughts, words, actions, and omissions for the purpose of ascertaining their conformity with, or deviation from, the moral law. Among Christians, this is generally a private review; secular intellectuals have, on occasion, published autocritiques for public consumption. In the Catholic Church penitents who wish to receive the sacrament of penance are encouraged to examine their conscience using the ten commandments as a guide, or the Beatitudes, or the virtues and vices. A similar doctrine is taught in Lutheran churches, where penitents who wish to receive Holy Absolution are also asked to use the ten commandments as a guide. The process is very similar to the Islamic practice of Muhasaba, or self-reflection.

"The excellence of this practice and its fruitfulness for christian virtue," preached Pope St. Pius X, "are clearly established by the teaching of the great masters of the spiritual life." St. Ignatius of Loyola considered the examination of conscience as the single most important spiritual exercise.

St. Ignatius included the Examination in the Spiritual Exercises and already there he presents different forms of it (particular and general examination, see in [24-43] in the book of the Spiritual Exercises, with the customary marginal numbers ). Since then the method became known under various names in the spiritual literature and practice, it is called sometimes “Awareness Examen”, sometimes “Daily Examination of Consciousness” in [1] for example.

In general, there is a distinction between the “Particular Examen”, which aims to change one particular feature or defect in ones behavior and the “Daily Examination of Consciousness”, which is a prayerful review of one day and finally the “General Examination of Conscience”. This last method is called examination of “conscience” because it is a review of one’s actions from a moral point of view, reflecting upon one’s responsibility and looking at one’s sins and weaknesses in preparation for repentance in contrast with the examination of “consciousness” which does not focus on morality even if sins will emerge during the review of the day. See [2], [3]

Some of the ancient philosophers -- the Stoics in particular -- studied to be blameless in their own sight, and for this they made frequent use of self-inspection. They professed the doctrine that the happiness and dignity of man consist in virtue, or compliance with the law of reason, or with conscience; and thus examinations of conscience were a regular practice in the schools of the Stoics and of their later followers, such Eclectics as Quintus Sextius and Seneca.

Examination of conscience was commanded by the Apostle St. Paul to be performed by the faithful each time they received Holy Communion: "But let a man examine himself, and so let him eat of that bread, and drink of that cup. For he that eateth and drinketh unworthily, eateth and drinketh damnation to himself.... For if we would judge ourselves, we should not be judged." (1 Corinthians 11:28-31, KJV). And, as the early Christians received Holy Communion very frequently, examination of conscience became a familiar exercise of their spiritual lives. In many cases, this became a daily practice of the lives of early members of the clergy and those living a monastic life, such as the hermit St. Anthony, who was said to have examined his conscience every night[citation needed], while St. Basil of Caesarea, St. Augustine of Hippo and St. Bernard of Clairvaux, and founders of religious orders generally made the examination of conscience a regular daily exercise of their followers. Lay members of congregations were encouraged to take up the practice as well as a salutary measure by their priests and bishops as a means of furthering their religious formation.[citation needed]

St. Bernard taught: "As a searching investigator of the integrity of your own conduct, submit your life to a daily examination. Consider carefully what progress you have made or what ground you have lost. Strive to know yourself. Place all your faults before your eyes. Come face to face with yourself, as though you were another person, and then weep for your faults."[citation needed]

In Catholicism, this should be kept distinct from the Sacrament of Reconciliation, as an examination of conscience only brings to light sins, but does not in and of itself forgive them, as it is dogma that, barring perfect contrition, only the grace of Christ, through his priest in persona Christi, can forgive sins. However, Catholics believe that a full examination of conscience is an effective and necessary step to making a good confession.[citation needed]

As to the daily examination of conscience, two species must be distinguished, the general and the particular. The former aims at the sober identification of all kinds of faults, the latter at the avoidance of some particular fault or the acquisition of some particular virtue.

As to the importance of this practice, St. Pius X taught in Haerent Animo: 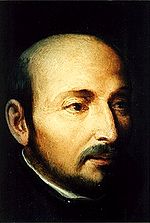 Ignatius Loyola: Examination of conscience is the single most important spiritual exercise

The excellence of this practice and its fruitfulness for christian virtue are clearly established by the teaching of the great masters of the spiritual life.[citation needed]

Among secular intellectuals, particularly Marxists, the term autocritique, borrowed from the French, is used. This is particularly applied to a public, "methodological attempt to step away from themselves through a process of self-objectification", and was popular in France following the Algerian War[4]. Edgar Morin's questioning of his own motives as a defender of Algeria popularised the term; other well-known examples include Jawaharlal Nehru's anonymous dissection of his own personality and drive in the Modern Review.