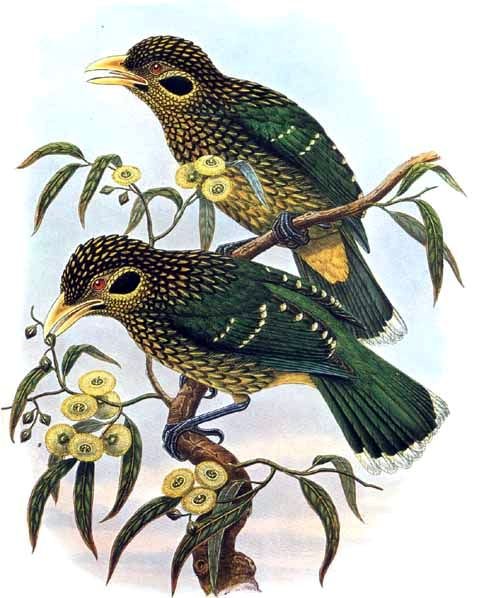 regnum = ia
phylum = Chordata
classis = Aves
ordo =
familia =
genus = ""
species = "A. melanotis"
binomial = "Ailuroedus melanotis"
binomial_authority = Gray, 1858The Spotted Catbird, "Ailuroedus melanotis" is a species of which can be found in north . It is approximately 26-30 cm in length, and its coloring is emerald green, with faint black markings on the face and white streaks on the neck. The male and female are almost identical.

Spotted Catbird feeds mainly on , s, , , and even on other birds' eggs and young. The breeding season is from September to December. Spotted Catbirds pair monogamously, and lay one to three eggs each year. Incubation lasts 19-25 days.

The Spotted Catbird is extremely similar to the , and are considered the same species by some.

Widespread and common throughout its large range, the Spotted Catbird is evaluated as Least Concern on of Threatened Species.