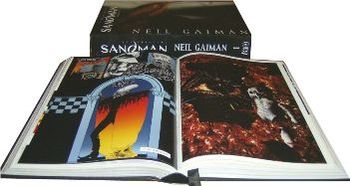 DC Comics Absolute Edition is a series of archival quality printings of graphic novels published by DC Comics and its imprints WildStorm Productions and Vertigo. Each is presented in a hardcover, dustjacketed and slipcased edition with cloth bookmark consisting of one or more books which include restored, corrected and recolored versions of the original work, reprinted at 8 inches by 12 inches. Also included are supplemental materials regarding the creation of the work, including sketches, comic scripts and memos.

The following titles in the series have been released or announced.

Unlike most of the other Absolute Editions which are a single slipcased book, this was a set of two volumes, with the separate 96 page book containing most of the supplementary material. In addition to memos, notes, sketches, and commentary by the creators, it includes The Official Crisis on Infinite Earths Index #1 and The Official Crisis on Infinite Earths Crossover Index #1, both reprinted for the first time. Released November 16, 2005. ISBN 1-4012-0712-X.

The League of Extraordinary Gentlemen

The supplemental material for this volume is reprinted from the limited edition Watchmen hardcover published by Graphitti Designs in 1987. It includes background on characters, the original creation process as well as brief essays by Alan Moore and Dave Gibbons. Originally released October 5, 2005 (ISBN 1-401-20713-8) it–along with other editions and material–was re-released on November 12, 2008 about a year ahead of the film adaptation. This volume remains available, going through five printings as of 2009[update].

The following titles are not officially part of the Absolute series, but are similar to actual labeled Absolute editions in terms of their contents and size.

Released in December 2000. Collects the 1970s run by Dennis O'Neil and Neal Adams of Green Lantern (vol. 2) #76-87, #89 and The Flash (vol. 2) #217-219 and #226, where Green Lantern and Green Arrow travel the United States. The book is the first release of what would become the Absolute format, with oversized hardcover comic collections in slipcases. This book, however, is not as oversized as the Absolute books.