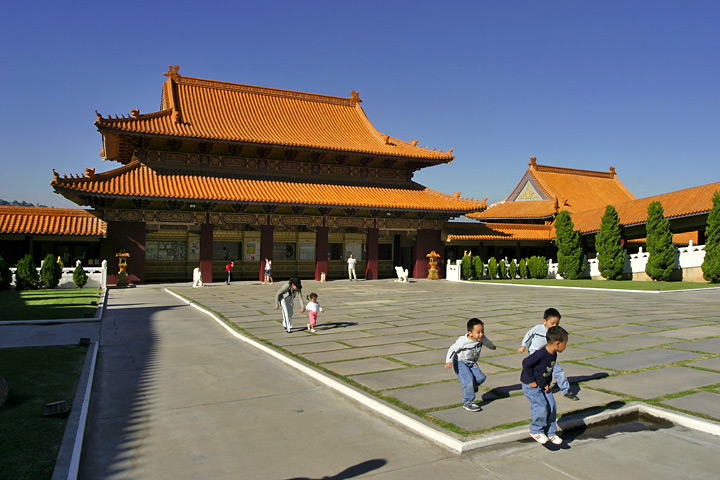 Hsi Lai Temple (TC: 西來寺; PY: "Xīlái Sì") (approximate pronunciation "She Lye") is a traditional Chinese Buddhist mountain monastery in the . It is located on the region of Hacienda Heights, , , a suburb of Los Angeles. The name "Hsi Lai" means "Coming West" in the sense of the "Great Buddhadharma Coming West."

The temple is affiliated with one of Taiwan's largest religious organizations, the Buddhist order. It is one of the first branch temples the order has built, and is often called the "torch of Dharma" by order members. Hsi Lai was the site of the founding of , which was established in 1991. The temple, like its mother temple in Taiwan, practices , which incorporates all of the eight traditional schools of Chinese Buddhism - especially the Chan and schools - to provide guidance deemed most useful to modern life.

In , Master Hsing Yun, the founder of the order, represented a Buddhist group from Taiwan to participate in America's bicentennial celebration. Master Hsing Yun was asked by American friends to build a monastery in the United States. Therefore, Fo Guang Shan asked the Venerable Tzu Chuang (who, upon the inception of the temple, became the founding and first abbess of Hsi Lai Temple) and Yi Heng to plan and organize the construction of the temple in the Greater Los Angeles area. It was officially registered under the name of "International Buddhist Progress Society." Until the temple was complete, Ven. Tzu Chuang bought an old church building, which was to be Hsi Lai's temporary headquarters. The original temple, located in the city of Maywood was called the "Bai Ta" (White Pagoda) Temple.

The planning and construction of the temple in the 1980s was met with suspicion and resistance from local communities, many of whom knew little about or had negative attitudes toward it Fact|date=May 2008. Some main reasons for resistance against the building of the temple was the promise of weekly services, heavy traffic, noise, and concern about environmental damage.

Originally, the organization had planned to build the temple in the South Bay, area, but were blocked from acquiring land. They also tried to acquire Pyrenees Castle in Alhambra, but also met opposition from the community. [http://www.cityofalhambra.org/community/castle.html Pyrenees Castle] The building of the temple at its current location survived six public hearings and 165 explanatory sessions Fact|date=May 2008. Finally in 1985, the temple was finally granted a building permit. The groundbreaking ceremony was held the following year, and was completed on November 26th, 1988.

The temple was finished at a cost of $10 million. Such negative feelings about the building of Hsi Lai have diminished as the general level of awareness has been raised and as the temple and its residents have proven to be good neighbors.

Immediately after its opening, Hsi Lai was the venue of many important events. The 16th General Conference of the and the 7th conference of the World Fellowship of Buddhist Youth were held from November 19th to the 26th, an international Triple Platform Full Ordination Ceremony for monastics was held for over a month, and a Liberation Rite of Water and Land, the first of its kind in North America, was held prior to the temple's opening.

University of the West

In , in conjunction to the completion of Hsi Lai Temple, Master Hsing Yun founded "Hsi Lai University", one of sixteen Buddhist colleges and universities operated by Fo Guang Shan. The university was relocated in in . It is one of the first Buddhist colleges in the United States.

Degrees are currently offered for and Master of Arts in Buddhist studies, comparative religious studies, and a .

In , the university changed its name to the "University of the West" and appointed Dr. Lewis Lancaster, a religion professor at and longtime member of Fo Guang Shan, as president. Dr. Roger Schmidt became Lancaster's successor in 2006, who was then replaced by Dr. Allen M. Huang a year later.

*The Bodhisattva Hall (五聖殿): The first shrine before entering the temple. It is a large hall that honors five Bodhisattvas, ("Pǔxián"), ("Dìzàng"), ("Mílè"), "()", and ("Wenshu"). Outside the shrine, on each side, honors the Bodhisattvas Skanda ("Weituo") and Sangharama ("Qielan").
*The Garden (十八羅漢): Located on the left of the temple, it contains 18 statues of the earliest known disciples of the Buddha.
*The Avalokitesvara Garden (慈航普度): Located on the right of the temple, it is also known as the "Salvation Garden". It contains the acolytes of Avalokitesvara (Guan Yin) and statues of the .
*Founder's Statue (創辦人 星雲大師雕像): A bronze statue of Venerable Master . The statue is behind the Bodhisattva hall, facing the main shrine.
*Main Shrine (大雄寶殿): The heart of the temple's activities. It contains the statues of the historical Buddha , Buddha, and Buddha. Thousands of niches containing an image of the Buddha can be seen on the walls. Outside, a large bell and drum can be seen on either side. Traditionally in many Chinese Ch'an temples, these bells are played daily to ready monastics for daily practice. Hsi Lai does not use these instruments regularly because of their loud volume when played as there are residential areas at the foot of the temple. The bell and drum are only used to mark special occurrences.
*Requiem Pagoda (懷恩堂): Located at the summit of Hsi Lai, it honors those who have died. In the past, it was also a small , but since there was no more room for urns to be interred, the urns were moved to a new Buddhist mausoleum built by Hsi Lai in 1999, located at the summit of in Whittier. The Requiem Pagoda is now for people who entered their loved one's names in the pagoda, and can only be accessed by request.
*Meditation Hall (禪堂): Located on the back of the main shrine, and next to the monastic dorm rooms, meditation classes are held here.
*Dining Hall (五觀堂): Vegetarian buffets are served here every day for lunch only, and sometimes dinner on special days. Each person can make a voluntary donation for their lunch.
*Translation and Publishing Center (佛光山國際翻譯中心與佛光出版社): The "Fo Guang Shan International Translation Center" and "" are located on the very top of the temple complex cross facing to the Requiem Pagoda. Buddha's Light Publishing was established to publish Buddhist books translated by the Fo Guang Shan International Translation Committee as well as other valuable Buddhist works.

Hsi Lai is a popular venue for tourists interested in learning more about and Buddhism, and has even been coined the " of America." Fact|date=May 2008 Over the years since its foundation, Hsi Lai has been a popular site for school field trips, business trips, organizational meetings, personal leisure, and a center for interreligious dialog.

In addition to workshops on Buddhism, the temple also holds workshops on a wide range of topics including taxation, legal issues, education, immigration, marriage, and family discipline.

Regular Dharma services are held on Sunday and weekday mornings, usually chanting various such as the or the . Meditation sessions, retreats and Buddhism classes, are held on some days of the week, which are offered in both English and Chinese. Monks and nuns who reside at the temple speak a variety of languages besides Mandarin, primarily English and Cantonese, are available to perform weddings or funerals services.

Many larger services held annually mostly revolve around , along with the Buddhist, and philosophy of love and respect for one's parents and ancestors. In the spring, they hold a large service in commemoration of Ching Ming, a traditional Chinese festival where many pay respects to deceased relatives by cleaning their graves. In the summer, they hold a large service in commemoration of Ullambana. During this time, they also hold a ceremony known as " Day", where devotees gather to honor the monastics by offering food to them, as well as offer a public cultural performance, performing classical and traditional Chinese music or elegant solo dances.

Annually, retreats and services are held for taking in the Triple Gem, receiving the five precepts, and a short-term monastic retreat where disciples are able to temporarily experience life as a monastic.

*Water Repentance Service (水懺法會): A one day repentance service for filial piety. Held during the .
*Emperor Liang Repentance Service (梁皇法會): A week long service held during Ullambana.
* 7-day Retreat (彌陀佛七): Seven days of mindful recitation of the and Amitabha's name.
* Flaming Mouth (瑜伽焰口): A Tantric ceremony inviting and feeding sentient spirits. Held in the afternoon after Sangha Day, and at the end of the Emperor Liang Repentance service.
*Great Compassion Repentance Service (大悲懺法會): Monthly service held in the evening on the second Friday. A popular service at Hsi Lai, it involves the recitation of the Great Compassion , elaborate bowing, offering, and circumbulations.
*Grand Offering to Celestial Beings (供佛齋天): A ceremony inviting heavenly deities. Held two days before .
*Bathing Buddha Ceremony (浴佛法會): Celebration of the held in and outside Hsi Lai, and is hosted by other temples in Southern California.
*Thousand Buddha Repentance Service (禮千佛法會): A short ceremony paying homage to Buddhas and bodhisattvas; held during the Chinese New Year celebrations.
*Liberation Rite of Water and Land (水陸法會): The largest ritual in traditional Chinese Buddhism, which involves inviting beings from higher realms to help beings in the lower realms escape from their suffering. Hsi Lai has only held this ceremony twice, once in to celebrate the temple's opening, and in to celebrate the . It will be held again in 2008 to celebrate the temple's 20th anniversary.

A campaign finance controversy centered on Hsi Lai Temple erupted during the 1996 presidential campaign. Vice President attended a luncheon at the temple. The U.S. Justice Department alleged that solicited $55,000 in donations for the the following day, which were later reimbursed with temple money. [http://www.washingtonpost.com/wp-srv/politics/special/campfin/players/hsia.htm] Non-profit groups are not allowed to make political contributions. Hsia was eventually convicted by a jury in March 2000 of laundering the contributions and sentenced to 90 days home detention, a fine, and community service.

Claims of the largest monastery in the Western Hemisphere

Since 1988, members of Hsi Lai and others have claimed that their temple is the largest temple in the . However, the situated in , has over 80 acres of built-up land on convert|488|acre|km2 of property as compared to Hsi Lai Temples' 15 acres, but rather than a temple complex as is Hsi Lai Temple, the City of Ten Thousand Buddhas is more of an entire community with several large buildings clustered together. Therefore, both organizations lay claim to being the largest Buddhist monastery in the West.

Past Abbots and Abbesses of Hsi Lai