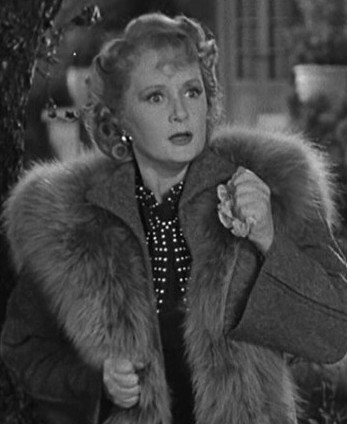 Mary William Ethelbert Appleton "Billie" Burke (, – , ) was an Oscar-nominated American actress primarily known to modern audiences for her role as the Good Witch of the North in the musical film "The Wizard of Oz".

Known as Billie Burke, she toured the U.S. and with a because her father, Billy Burke, was employed with them as a singing . Her family ultimately settled in London where she was fortunate to see plays in 's historic West End.

She wanted to be a stage actress. In 1903, she began acting on stage, making her debut in , and eventually returning to America to become the toast of Broadway as a musical comedy star. She was praised by "" for her charm and her brightness.

Thanks to her representation by famed producer , Burke went on to play leads on Broadway in "Mrs. Dot", "Suzanne", "The Runaway", "The "Mind-the-Paint" Girl", and "The Land of Promise" from 1910 to 1913, along with a supporting role in the revival of Sir Arthur Wing Pinero’s "The Amazons".

In 1936, MGM filmed a biopic of her deceased husband (""), a film that won Oscars for Best Picture and Best Actress ( as Ziegfeld's common-law wife, ). Burke was herself a character in the film, but she was not cast as herself. Instead, prominent actress essayed the role of Burke. Coincidentally, who was later cast as the Scarecrow in "The Wizard of Oz" (1939) also starred as himself in the movie.

In 1933, Burke was cast as Mrs. Millicent Jordan, a scatterbrained high-society woman hosting a dinner party in the comedy "Dinner at Eight", directed by , co-starring with , , , and . The movie was a great success, and revived Burke's career. She subsequently starred in many comedies and musicals, typecast as a ditzy, fluffy and feather-brained upper-class matron, due to her helium-filled voice.

In 1937 she appeared in the first of the "Topper" series of films, about a man haunted by two socialite ghosts (played by and ), in which she played the tremulous and daffy Clara Topper. Her performance as Emily Kilbourne in "" (1938) resulted in her only Oscar nomination.

She wrote two autobiographies, both with Cameron Van Shippe:"With a Feather on My Nose" (Appleton 1949) and "With Powder on My Nose" (Coward McCann, 1959).

On , "The Billie Burke Show" was heard on Saturday mornings from , to , . Sponsored by Listerine, this situation comedy was initially titled "Fashions in Rations" during its first year. Portraying herself as a featherbrained who lived "in the little white house on Sunnyview Lane," she always offered a helping hand to those in her neighborhood. She worked often in early television, appearing in the short-lived "Doc Corkle" (1952).

Burke tried to make a comeback on the New York stage. She starred in two short-lived productions: "This Rock" and "Mrs. January and Mr. Ex". Although Burke got good reviews, the plays did not. She appeared in several plays in California as well, although her mind became clouded, and she had trouble remembering lines. In the late 1950s, her failing memory led to her retirement from show business, although her explanation for that was, "Acting just wasn't any fun anymore."

Her last screen appearance was in "Sergeant Rutledge", a Western directed by in 1960.

Billie Burke died in of , thought to be and , aged 85, in 1970 and was interred at , Valhalla, , survived by her daughter, Patricia, and four grandchildren. [cite news |first= |last= |authorlink= |coauthors= |title=Billie Burke Dead; Movie Comedienne; Billie Burke, Film Comedienne And Once a Stage Beauty, Dies. |url=http://select.nytimes.com/gst/abstract.html?res=F40710FD3F5D137B93C4A8178ED85F448785F9 |quote=Billie Burke, a great Broadway beauty when the century was young and later renowned as a movie comedienne, died last night at the age of 84. |publisher= |date=, |accessdate=2008-05-11 ]

For many years, Burke's framed photo was displayed above the exit staircase at 's , but it curiously vanished after renovations to it. However, an opening night program, bearing a picture of Burke, from her 1912 triumph "The Mind The Paint Girl" (Sir Arthur Wing Pinero) is still displayed in the lobby of the Lyceum Theatre in New York City.

"Age is something that doesn't matter, unless you are a cheese."