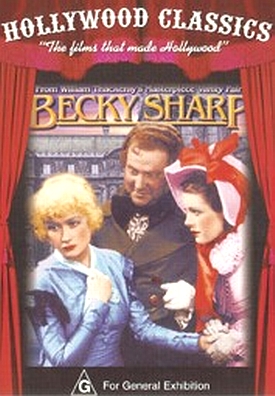 "Becky Sharp" is an American film released in 1935 and directed by . [imdb title|id=0026104.] It is based on the play of the same name by , which in turn is based on 's novel "". The screenplay was written by Francis Edward Faragoh.

It tells the story of a lower-class girl who insinuates herself into an upper class family, only to see her life and the lives of those around her destroyed. The ruthless, self-willed and beautiful Becky is one of the most famous characters in .

Lowell Sherman, the original director, developed early in filming, and had to leave the production. His replacement, Mamoulian, scrapped all of the original footage and started over.

"Becky Sharp" was the first feature length film to use the three-strip process.

The film tells of social climber Becky Sharp (), an English young lady who manages to survive during the years following Napoleon's defeat at Waterloo.

In her efforts to advance herself, she manages to link up with a number of gentlemen: the Marquis of Steyne (), Joseph Sedley (), Rawdon Crawley (), and George Osborne (G. P. Huntley Jr).

She rises to the top of British society and becomes the scourge of the social circle, offending the other ladies such as Lady Bareacres ().

Finally, Sharp falls into the humiliation of singing for her meals in a beer hall. But, Becky never stays down for long.

* as Becky Sharp
* as Amelia Sedley
* as Marquis of Steyne
* as Lady Bareacres
* as Miss Crawley
* as Joseph Sedley
* as Rawdon Crawley
* G.P. Huntley as George Osborne
* William Stack as Pitt Crawley
* George Hassell as Sir Pitt Crawley
* as Duke of Wellington
* Charles Richman as Gen. Tufto
* Doris Lloyd as Duchess of Richmond
* as Capt. William Dobbin
* as Tarquin