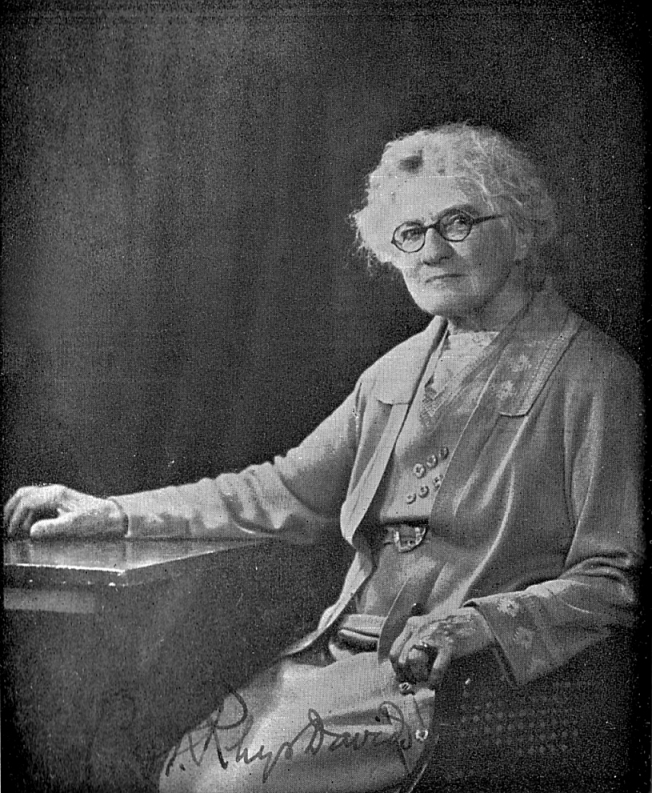 Caroline Augusta Foley Rhys Davids (1857–1942) was a language scholar and translator, and from 1923-1942 president of the which was founded by her husband T.W. Rhys Davids whom she married in 1894.

Caroline Augusta Foley Rhys Davids was born on September 27, 1857 in Wadhurst, East Sussex to John Foley and Caroline Elizabeth Foley (maiden name Caroline Elizabeth Windham). Caroline was born into a family with a long ecclesiastic history--her father, John Foley, served as the vicar of Wadhurst from 1847-88; her grandfather and great grandfather had served as rector of and vicar of Mordiford, Herefordshire, respectively. She studied at University College, London studying mainly economics, philosophy, and psychology. While studying there, she also began studying under . As a student, she was already a prolific writer and a vocal campaigner in the movements for poverty relief, , and . She completed her BA in 1886 and her MA in 1889.

A mutual friend introduced Caroline and her future husband T. W. Rhys Davids, knowing that they both shared an interest in Indic studies, and they married soon afterwards. T. W. Rhys Davids encouraged Caroline to pursue Buddhist studies and do research about Buddhist psychology and the place of women in Buddhism. Thus, among her first works were a translation of the , a text from the Piṭaka, which she published under the title "A Buddhist manual of psychological ethics: Being a translation, now made for the first time, from the original Pali, of the first book in the Abhidhamma Piṭaka, entitled :Dhamma-sangaṇi (Compendium of States or Phenomena)" (1900); a second early translation was that of the Therīgāthā, a canonical work of verses traditionally ascribed to early Buddhist nuns (under the title "Psalms of the Sisters" [1909] ).

She obtained the position of Lecturer in Indian Philosophy at in 1910 and held that position until 1913. Between 1918 and 1933 she worked as Lecturer in the History of Buddhism at the School of Oriental Studies (later renamed the ). While teaching, she simultaneously acted as the Honorary Secretary of the which had been started by her husband to transcribe and translate Buddhist texts. She held that position from 1907 until her husband's death in 1922; the following year, she took his place as President of the Society.

Her translations of Pāli texts were at times idiosyncratic but her contribution was considerable. She was one of the first scholars to attempt translations of texts, known for their complexity and difficult use of technical language. She also translated large portions of the Sutta Piṭaka, or edited and supervised the translations of other PTS scholars. Beyond this, she also wrote numerous articles and popular books on Buddhism; it is probably in these manuals and journal articles where her controversial "volte-face" towards several key points of Theravāda doctrine can first be seen. Although earlier in her career she accepted more mainstream beliefs about Buddhist teachings, later in life she rejected the concept of anatta as an "original" Buddhist teaching. She appears to have influenced several of her students in this direction, including , , and .

Unlike her husband, C.A.F. Rhys Davids became strongly influenced by Spiritualism and possibly by . Of the two, it was probably and her own education in psychology under at which most influenced her later reinterpretation of Buddhism. It should be noted that she seems to have had little actual interaction with Theosophical groups until very late in her career, and can even be seen to criticize Theosophical belief in some works. She became particularly involved in various forms of communication with the dead, first attempting to reach her dead son through and then through . She later claimed to have developed , as well as the ability to pass into the next world when dreaming. She kept extensive notebooks of , along with notes on the afterlife and diaries detailing her experiences, which are held by the . [ [http://archives.ulrls.lon.ac.uk/dispatcher.aspx?action=search&database=ChoiceArchive&search=IN=MS1082 Description of Caroline Rhys Davids' papers] ]

*"Buddhist Psychology: An Inquiry into the Analysis and Theory of Mind in Pali Literature" (1914)

*"The Milinda-questions : An Inquiry into its Place in the History of Buddhism with a Theory as to its Author" (1930)

*"The Birth of Indian Psychology and its Development in Buddhism" (1936)

*"A Buddhist manual of psychological ethics or Buddhist Psychology, of the Fourth Century B.C., being a translation, now made for the first time, from the Original Pāli of the First Book in the Abhidhamma-Piţaka, entitled Dhamma-Sangaṇi (Compendium of States or Phenomena)" (1900). ("Includes an original 80 page introduction.") Reprint currently available from [http://www.kessinger.net/searchresults_orderthebook.php?Title=3517 Kessinger Publishing] . ISBN 0-7661-4702-9.

*"Points of controversy; or, Subjects of discourse; being a translation of the Kathā-vatthu from the Abhidhamma-piṭaka", Co-authored with Shwe Zan Aung (1915)