A condenser is one of the main components of the optical system of many transmitted light compound microscopes. A condenser is a lens that serves to concentrate light from the illumination source that is in turn focused through the object and magnified by the objective lens. It is a basic component of almost all compound light microscopes manufactured since the 19th Century. An equivalent condenser, which focuses an electron beam, is a basic component of both transmission and scanning electron microscopes. 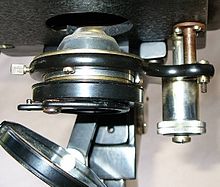 Condensers are located above the light source and under the sample in an upright microscope, and above the stage and below the light source in an inverted microscope. They act to gather light from the microscope's light source and concentrate it into a cone of light that illuminates the specimen. The intensity and angle of the light cone must be adjusted (via the size of the diaphragm) for each different objective lens with different numerical apertures. Condensers typically consist of a variable-aperture diaphragm and one or more lenses. Light from the illumination source of the microscope passes through the diaphragm and is focussed by the lens(es) onto the specimen. After passing through the specimen the light diverges into an inverted cone to fill the front lens of the objective. There are four types of condenser: 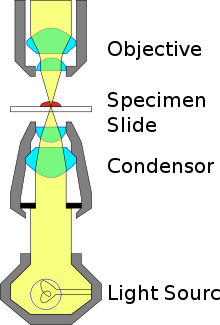 The sub-stage condenser focuses light through the specimen to match the aperture of the objective lens system.

The Abbe condenser is named for its inventor, Ernst Karl Abbe, who developed it in 1870. The Abbe condenser, which was originally designed for Zeiss, is mounted below the stage of the microscope. The condenser concentrates and controls the light that passes through the specimen prior to entering the objective. It has two controls, one which moves the Abbe condenser closer to or further from the stage, and another, the iris diaphragm, which controls the diameter of the beam of light. The controls can be used to optimize brightness, evenness of illumination, and contrast. Abbe condensers are particularly important for magnifications of above 400X.

This condenser is composed of two lenses a plano-convex lens somewhat larger than a hemisphere and a large bi-convex lens serving as a collecting lens to the first. The focus of the first lens is traditionally about 2mm away from the plane face coinciding with the sample plane. A pinhole cap can be used to align the optical axis of the condenser with that of the microscope. The Abbe condenser is the basis for most modern light microscope condenser designs.[1][2]

Specialised condensers are also used as part of Differential Interference Contrast and Hoffman Modulation Contrast systems, which aim to improve contrast and visibility of transparent specimens.

In epifluorescence microscopy, the objective lens acts not only as a magnifier for the light emitted by the fluorescing object, but also as a condenser for the incident light.