Confraternities of the Cord

Confraternities of the Cord

Confraternities of the Cord are pious associations of the faithful, the members of which wear a cord or cincture in honour of a saint, to keep in mind some special grace or favour which they hope to obtain through his intercession.

Among Asian peoples, and especially among the Jews, whose priests and prophets wore a cincture, the wearing of a belt or girdle dates back to very ancient times.

Christ himself commanded his Apostles to have their loins girded.

In the early Church virgins wore a cincture as a sign and emblem of purity, and hence it has always been considered a symbol of chastity as well as of mortification and humility.

The wearing of a cord or cincture in honour of a saint is of very ancient origin, and we find the first mention of it in the life of St. Monica.

In the Middle Ages cinctures were also worn by the faithful in honour of saints, though no confraternities were formally established, and the wearing of a cincture in honour of St. Michael was general throughout France.

Later on, ecclesiastical authority set apart special formulae for the blessing of cinctures in honour of the Most Precious Blood, of Our Lady, of St. Francis of Paola, and St. Philomena. There are in the Church three archconfraternities and one confraternity the members of which wear a cord or cincture.

The Archconfraternity of Our Lady of Consolation

(This is also known as the "Archconfraternity of the Black Leather Belt of St. Monica, St. Augustine and St. Nicholas of Tolentine".)

According to an old tradition, St. Monica in a vision received a black leather belt from the Blessed Virgin, who assured the holy widow that she would take under her special protection all those who wore it in her honour. St. Monica related this vision to St. Ambrose and St. Simplician; both saints thereupon put on a leather belt, and St. Ambrose is said to have girded her son, St. Augustine, with it at his baptism. Later on, it was adopted by the Hermits of St. Augustine as a distinctive part of their habit.

The principal feast of this confraternity is the Sunday within the octave of the feast of St. Augustine (28 August). The members are obliged to wear a black leather belt, to recite daily thirteen Paters and Aves and the Salve Regina, and to fast on the vigil of the feast of St. Augustine. For the erection of and reception into this archconfraternity, special faculties must be had from the Prior General.

Archconfraternity of the Cord of St. Francis

After his conversion St. Francis girded himself with a rough cord in the manner of the poor of his day, and a white cord with three knots came subsequently to form part of the Franciscan habit. According to the Franciscan historian Luke Wadding, O.F.M., St. Dominic received the cord from St. Francis when they exchanged their girdles in a sign of friendship. From that day on, Dominic always wore it under his habit out of devotion to his fellow founder, his example being followed by many of the faithful.

Pope Benedict XIII in his Constitution "Sacrosancti apostolatus" (30 September, 1724), conceded to the Minister General of the Conventuals authority to erect confraternities of the Cord of St. Francis in churches not belonging to his own order in those places where there were no Franciscans. New privileges and indulgences were conceded to the archconfraternity by two decrees of the Sacred Congregation of Indulgences dated 22 March, 1879, and 26 May, 1883. Besides the ordinary requirements necessary for the gaining of all plenary and partial indulgences, the wearing of the cord and enrollment in the records of the archconfraternity are the only conditions imposed on the members.

Archconfraternity of the Cord of St. Joseph 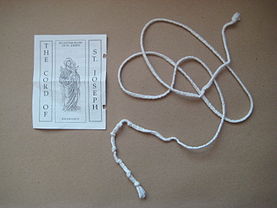 The miraculous cure of an Augustinian nun at Antwerp in 1657 from a grievous illness, through the wearing of a cord in honour of St. Joseph gave rise to the pious practice of wearing it to obtain the grace of purity through his intercession. The devotion soon spread over many countries of Europe, and in the 19th century was revived at Rome in the Church of St. Roch and in that of St. Nicolas at Verona, Italy. Pope Pius IX, in a rescript dated 19 September, 1859, approved a special formula for the blessing of the Cord of St. Joseph, and in his Brief "Expositum nobis nuper" (14 March, 1862) enriched the confraternity with many indulgences.

In 1860 several new indulgences were granted to the confraternity erected in the church of St. Nicholas at Verona and by the Brief "Universi Dominici gregis", 23 September, 1862, the Confraternity of the Cord of St. Joseph was raised to an archconfraternity.

The members are obliged to wear a cord having seven knots, and are exhorted to recite daily seven Glorias in honour of St. Joseph. Confraternities of the Cord of St. Joseph must be aggregated to the archconfraternity in the Church of St. Roch at Rome in order to enjoy its spiritual favours and Indulgences.

Confraternity of the Cord of St. Thomas

It is related in the life of St. Thomas Aquinas that, as a reward for his overcoming a temptation against purity, he was girded with a cord by angels, and that in consequence he was never again tempted against this virtue. This cord is still preserved in the church at Chieri, near Turin, Italy. Soon after the saint's death many of the faithful began to wear a cord in honour of St. Thomas, to obtain the grace of purity through his intercession.

In the 17th century, societies were formed at different universities, the student members of which wore a cord in honour of St. Thomas, hoping through his intercession to be protected from the dangers to which youth is generally exposed.

The first Confraternity of the Cord of St. Thomas was erected at the Catholic University of Leuven by the Belgian Dominican friar Francis Deuwerders, and numbered among its members all the professors and students of the faculty of Theology (which has Thomas Aquinas as patron saint) and many of the faithful. Thence it spread to Maastricht, Vienna, and many other cities of Europe.

Pope Innocent X sanctioned this new confraternity by a Brief dated 22 March, 1652. The members are required to have their names enrolled, to wear a cord with fifteen knots, and to recite daily fifteen Ave Marias in honour of St. Thomas. For the erection of and reception into this confraternity special faculties must be had from the Master General of the Dominicans. Its indulgences and privileges are contained in the great Bull of Pope Benedict XIII, "Pretiosus" (26 April, 1727, sect. 9) and in the decree of the Sacred Congregation of Indulgences (8 May, 1844).