The House of the Dead (novel) 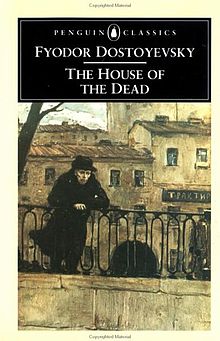 Penguin Edition of the House of the Dead

The House of the Dead (Russian: Записки из Мёртвого дома) is a novel published in 1861 in the journal Vremya[1] by Russian author Fyodor Dostoyevsky, which portrays the life of convicts in a Siberian prison camp. The novel has also been published under the titles Memoirs from the House of The Dead and Notes from the Dead House.

The book is a loosely-knit collection of facts and events connected to life in a Siberian prison, organised by "theme" rather than as a continuous story. Dostoyevsky himself spent four years in exile in such a camp following his conviction for involvement in the Petrashevsky Circle. This experience allowed him to describe with great authenticity the conditions of prison life and the characters of the convicts.

After his mock execution on the 22nd of December 1849, Dostoevsky was spared his life in exchange for 4 years of servitude in one of Siberia’s prison labour camps. Though he was often met with hostility from the other prisoners due to his status of “gentleman,” his views on life had changed and this precious gift, he did not take for granted. Ten years later, Dostoevsky returned to Russia to write, The House of the Dead. This novel mirrors several of the horrifying experiences he witnessed while in prison. He recalls the guards’ brutality and relish in performing unspeakably cruel acts, the crimes that the convicted criminals committed, and the fact that tousled amongst these great brutes were good and decent individuals.[2] However, he also displays admiration for the convicts’ abilities to commit murders without the slightest change in conscience. It was a stark contrast to himself and his high sensitivity levels. It was during his time in prison that he first began experiencing his epileptic seizures. House of the Dead led Dostoevsky to include the theme of murder in his later works, a theme not found in any of his works preceding House of the Dead.[3]

In 1927 – 1928, Leoš Janáček wrote an operatic version of the novel, with the title From the House of the Dead. It was his last opera.

The narrator, Aleksandr Petrovich Goryanchikov, has been sentenced to penalty deportation to Siberia and ten years of hard labour. Life in prison is particularly hard for Aleksandr Petrovich, since he is a "gentleman" and suffers the malice of the other prisoners, nearly all of whom belong to the peasantry. Gradually Goryanchikov overcomes his revulsion at his situation and his fellow convicts, undergoing a spiritual re-awakening that culminates with his release from the camp. It is a work of great humanity; Dostoyevsky portrays the inmates of the prison with sympathy for their plight, and also expresses admiration for their energy, ingenuity and talent. He concludes that the existence of the prison, with its absurd practices and savage corporal punishments is a tragic fact, both for the prisoners and for Russia itself.