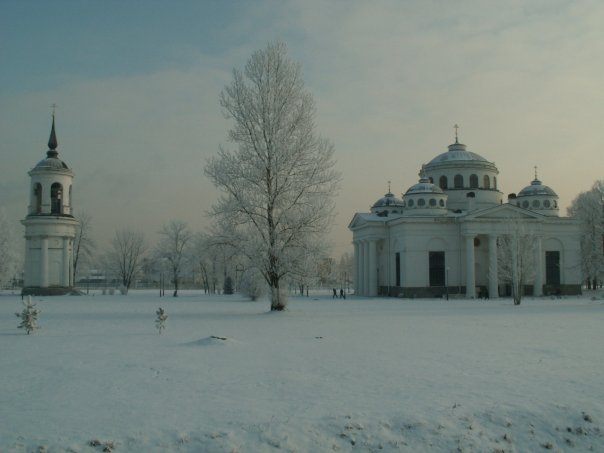 The Ascension Cathedral in the town of Sophia (now a part of Pushkin) in the vicinity of , was one of the first purely churches to be built in . Rather paradoxically, it may also be defined as "the first example of Byzantinism in " [Anthony Cross. "By the Banks of the Neva". Cambridge University Press, 1996. ISBN 0-521-55293-1. Page 292.] .

The cathedral was founded in July 1782 at the instigation of . The Tsarina, eager to liberate from the Turks, wished to have a replica of the in the proximity of the where she spent her summers. In addition, the cathedral was to be the chapter church of the newly established .

The Empress called upon her favourite architect, Charles Cameron, to design this "Byzantinesque" church, but the Scottish architect, though well versed in the Palladian idiom, had a vague idea of what stood for. His design called for an austere and monumental whitewashed exterior, with Doric porticoes on each side, probably a reference to the works of Lord Burlington.

Construction works, supervised by , lasted for six years. In the eventual variant, the five wide domes were placed on squat drums, vaguely reminiscent of the . The church was consecrated on , in the presence of the Empress. During the two decades that followed, the had the interior adorned with Neoclassical paintings. A detached two-storied belltower was added considerably later, in 1905, to a design by .

In 1817, gave the cathedral to a regiment of his , which was quartered in Sophia. During the rest of the 19th century, the regiment had the cathedral transformed into a sort of military museum, its walls lined with marble plaques honouring the hussars' victories. Near the altar, for instance, were placed the banners captured by General Cherniaev from the Khan of .

In 1934, the Communist government had the cathedral closed down, with marble plaques and precious furnishings either nationalized or stolen. It stood abandoned until 1990, when the resumed worship there. The same year, a bust of was added nearby, by way of commemorating the 750th anniversary of the .