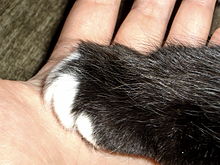 The death of a pet or an animal to which one has become emotionally bonded can be an intense loss,[1] comparable with the death of a human loved one, or even greater depending on the individual. The death can be felt more intensely when the owner has made a decision to end the pet’s life through euthanasia. [2] While there is strong evidence that animals can feel such loss for other animals,[3] this article focuses on human feelings, when an animal is lost, dies or otherwise is departed.

Effect of animal loss on humans

There is no set amount of time for the grieving process to occur. However, mourning is much more intense for a pet upon whom the owner was emotionally dependent. Additionally, some pet owners may feel unable to express their grieving due to social mores surrounding pets. If the pet owner internalizes the grief, the suffering increases.[4] Also, there can be a difference between male and female reactions to the death of a pet. Men, especially in Western cultures, are socialized to internalize their feelings, and so though pet ownership is divided equally between males and females, males may feel it necessary to hide their grief.[5]

The stages of grief proposed by Dr. Elizabeth Kübler-Ross was designed in relation to human death, but can be adapted to describe the grief process for the death of a pet.[6] Indeed, pet death includes several lessons: 1) the relationship rather than the object (the animal) is central to understand the loss; 2) the manner of death/loss will affect the grieving process; 3) the age and living situation of the bereaved will affect the grieving process.[7]

Though well-meaning, phrases like "time heals all wounds" can simply upset the grieving pet owner. However, it is true that the one factor required for all coping strategies is time.[8] Coping also involves understanding the emotions surrounding the loss of a pet, and then accepting the emotions to focus towards positive solutions.

After the loss of the animal or pet, there are further coping strategies available for the grieving individual:

Although most pets are lost due to euthanasia[citation needed], there are several special types of loss:[10][11]

Getting a new animal

One caveat is to carefully consider timing bringing a new pet into the home.[12] Additionally, it is recommended to consider where the bereaved is in the grieving process.[13] Choose the new pet for its own unique qualities rather than trying to replace the former pet.[14]

Pet illness and death is gradually becoming recognized as similar to other forms of sickness and death in the family. In the UK, a variety of companies provide paid leave for such eventualities,[15] with employment tribunals backing this in some instances where employment terms did not specifically mention pet loss.[16]

Recent studies by insurers suggest that up to one in four pet owners are sufficiently affected by pet loss or illness to take time off, but that many feel this will be treated lightly and hence simply state they were sick. According to Petplan, 35% of people admitted to taking time off work to either settle new pets into the home or care for sick pets, and half of those admitted taking a whole week off,[17] and according to Direct Line one in four pet owners "said they have been too upset to go into the workplace when their four legged friend died" and "many of those who did go into work after the death of their pet said they were unproductive." [18] The latter survey also noted that pet owners in the UK take "around 8 million days off" due to grief at the death of a pet, and that "seventy-nine percent of people responding to the survey admitted they did not think their boss would be sympathetic, and the only way they could get time off work was by ... pretending to be ill." [17]

Religions are divided as to whether non-human animals are believed to have souls, reincarnate or none, and also whether animals will exist in the afterlife.

In the absence of a common religious belief, many pet owners have embraced the concept of the Rainbow Bridge. The concept, the origin of which is not clearly known, speaks of a metaphorical or mythical place of reunion where pets that die live in a paradisical version of limbo, rejuvenated and free of pain and suffering, until their companion humans arrive upon their deaths.[19][20] At this point, the pet(s) run to their companion humans, and they enter heaven together, never to be parted again. Among pet owners who have embraced this concept, those pets who have died are often referred to as being At The Bridge or ATB.

Some Christians take comfort in Bible verses or stories that seem to point to the existence of animals in heaven, such as references to "the lion lying down with the lamb." Another popular passage is the well-known Matthew 5:8, "Blessed are the pure in heart, for they shall see God." Also, many Christians believe that the book of Ecclesiastes chapter 3, verses 18-22 show proof of animals in heaven, or at the very least, showing potential for a loved one's pet to be in heaven. In addition, there are many passages in the Bible that hint toward this occurrence. However, the Bible is mostly silent on the concept of animal souls.[original research?]

In Mormonism, all organisms (as well as the entire planet Earth) are believed to have a spirit, but that beings without the gift of free agency (the ability to know and choose between right and wrong) are innocent and unblemished spirits who go straight to Heaven when they die.[21] Animals will be resurrected.[22]

Animal chaplains are becoming increasingly popular for helping the bereaved family members deal with the loss of their pet, to provide memorial services, give spiritual reassurance, and to provide grief counseling.