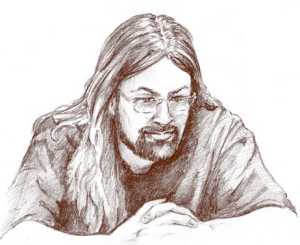 While he was sick with strep throat as a child, Butcher's sisters introduced him to "" and "The Han Solo Adventures" novels to pass the time, thus beginning his fascination with fantasy and .

For two years, Butcher floated his manuscript amongst various publishers before hitting the convention circuit to make contacts in the industry. After meeting Butcher in person, Ricia Mainhardt, the agent who discovered , agreed to represent him, kick-starting his writing career.

Six months after Butcher was signed by Mainhardt, "Storm Front", the first novel in "The Dresden Files", was picked up by ROC for publishing. It was released as a paperback in April 2000. "" followed nine months later on , , and the third book, "Grave Peril", appeared on store shelves in September of that year. Thereafter, the release schedule slowed, with "Summer Knight" appearing on , . The fifth and sixth books, "Death Masks" and "Blood Rites", appeared in August 2003 and 2004, respectively. Coinciding with the release of "Blood Rites", Butcher published a Harry Dresden short story, entitled "Restoration of Faith", on his website, chronicling Harry's life before "The Dresden Files" as a private eye for Ragged Angel Investigations.

"Dead Beat", released on , , was the first hardback release in the series by ROC. Unprecedented demand lead the initial run of 15,000 copies to sell through to stores in just three days, and the book immediately went into a second printing to prevent supply problems.

A ninth book from ROC, "White Night", was released on , , following closely on the heels of a February paperback release for "Proven Guilty". "White Night" reached the top five of the New York Times Best Seller List on an initial run of 100,000 copies.

The series garners a strong following and is now available in several languages, including Russian, Spanish, Czech, Polish, German and Mandarin Chinese.

The Dresden Files in other media

Due to the popularity of "The Dresden Files", [http://www.buzzymultimedia.com/ Buzzy Media Publishing] has released the first four novels as s in both audio and MP3 CD formats. They are voiced by actor . "Storm Front" was released in July 2002 as an unabridged 8-CD set, with an unabridged 9-CD set of "Fool Moon" following in August 2003. The "Grave Peril" audiobook shipped as an unabridged 10-CD set on , , with a free t-shirt bundled with all purchases before , . "Summer Knight" was released , . All four have since been released in -CD format with fewer discs.

announced in November 2007 that Penguin Audio had purchased the audio rights to the remaining Dresden Files novels, and the tenth novel, "Small Favor", would be next in line for audio treatment. The audio book was released simultaneously with the hardcover , 2008.

On , Butcher also inked a deal with [http://www.dresdenfilesrpg.com/ Evil Hat Productions] to release a role-playing game based on "The Dresden Files". The game uses a modified ruleset from Evil Hat's acclaimed Fate RPG. [cite web|url=http://www.jim-butcher.com/news/000047.php|title=jim-butcher.com|accessdate=2008-06-02]

Television writer and producer Morgan Gendel optioned "The Dresden Files" in June 2003, paving the way for a film or television release of the series.

On , , "Variety" reported that the television project had been officially greenlit by Sci Fi, with Hans Beimler and Robert Wolfe coming onboard as executive producers with Cage, Golightly, and Gendel. Production of the pilot took place in Toronto, and the original intent was to air the pilot movie in the summer of 2006.

After the season one finale aired on , , fans began a letter campaign in an attempt to have the show renewed.

After the success of Dresden, Butcher returned to the traditional fantasy genre with his second series, "Codex Alera". The series chronicles the life of a young man named Tavi from the Calderon Valley of Alera on the world of Carna. The people of Alera have grown complacent with the trappings of empire (the story is based loosely on the late ) and their control of powerful elemental forces known as furies. On March 3, 2003, Jim Butcher announced that Ace won a bidding war against rival publisher for the rights to the series.

The first novel in the series, "", was published in hardcover by Ace, and in August 2004, major booksellers began taking pre-orders for an , release. "Furies of Calderon" was the first hardcover release for Butcher,

While originally intended to be a six-book series, Codex Alera was initially signed as a trilogy. After the series showed success, Roc agreed to publish three more novels in the "Codex Alera" series.

Audio rights to the Codex Alera belong to Penguin Audio. "Captain's Fury" was released in audio format , , read by . Audio versions of the first three books will be released in November, 2008. The audio book of "Princeps' Fury" will be released simultaneously with the hardcover.