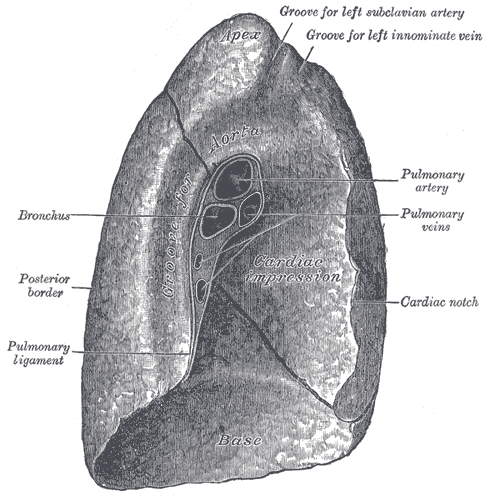 Caption2 = 1.
2. Vertebral part
3.
4. Cardiac impression
5. Diaphragmatic surface
System =
Precursor =
MeshName =
MeshNumber =
DorlandsPre =
DorlandsSuf =
The Left lung is divided into two lobes, an upper and a lower, by the , which extends from the to the both above and below the hilus.

As seen on the surface, this fissure begins on the at the upper and posterior part of the hilus, and runs backward and upward to the posterior border, which it crosses at a point about 6 cm. below the apex.

It then extends downward and forward over the costal surface, and reaches the lower border a little behind its anterior extremity, and its further course can be followed upward and backward across the mediastinal surface as far as the lower part of the hilus.

The "superior lobe" lies above and in front of this fissure, and includes the apex, the anterior border, and a considerable part of the costal surface and the greater part of the mediastinal surface of the lung.

The "inferior lobe", the larger of the two, is situated below and behind the fissure, and comprises almost the whole of the base, a large portion of the costal surface, and the greater part of the posterior border.

On the mediastinal surface, immediately above the hilus, is a well-marked curved furrow produced by the , and running upward from this toward the apex is a groove accommodating the ; a slight impression in front of the latter and close to the margin of the lung lodges the .

Behind the hilus and pulmonary ligament is a vertical furrow produced by the , and in front of this, near the base of the lung, the lower part of the causes a shallow impression.