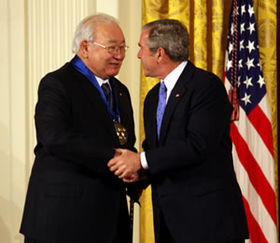 He is the son of the writer Natachee Scott Momaday and the painter Al Momaday, and was born on February 27, 1934 at the Kiowa-Comanche Indian Hospital in Lawton, Oklahoma, United States. He is enrolled in the Kiowa Tribe of Oklahoma but also has Cherokee heritage from his mother.[1]

Momaday's novel House Made of Dawn led to the breakthrough of Native American literature into the mainstream. It was awarded the Pulitzer Prize for Fiction in 1969.

In 1992, Momaday received the first Lifetime Achievement Award from the Native Writers' Circle of the Americas.[3] He was awarded a 2007 National Medal of Arts by former President George W. Bush.[4] N. Scott Momaday received an honorary Doctor of Humane Letters from the University of Illinois at Chicago on May 9, 2010.

Momaday founded and operates the Rainy Mountain Foundation[5] and Buffalo Trust, a nonprofit organization working to preserve native cultures.[6] He paints in watercolors and illustrated his own book, In the Bear's House.