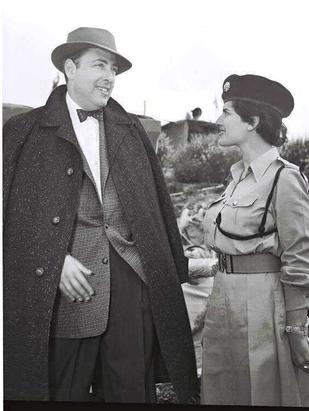 Herman Wouk was born in into a ish family that had from . After a childhood and adolescence in the Bronx and a high school diploma from , he earned a from in 1934, where he studied under philosopher . Soon thereafter, he became a , working in 's "Joke Factory" and later with for five years then in 1941, for the United States government, writing radio spots to sell s. His first novel, "The Man in the Trenchcoat", was published in 1941. He lived a fairly secular lifestyle in his early 20s before deciding to return to a more traditional Jewish way of life, modeled after his grandfather, in his mid-20s. From that day to the present, Wouk has commenced each day of his life with a reading of Scripture in Hebrew.

Wouk joined the and served in the Pacific Theater, an experience he later characterized as educational; "I learned about machinery, I learned how men behaved under pressure, and I learned about Americans." Wouk served as an officer aboard two minesweepers (DMS), the USS "Zane" and USS "Southard", becoming of the latter. He started writing his second novel, "Aurora Dawn", during off-duty hours aboard ship. Wouk sent a copy of the opening chapters to who quoted a few pages verbatim to a New York editor. The result was a publisher's contract sent to Wouk's ship, then off the coast of . The novel was published in 1947 and became a main selection. His third novel, "", proved to be a commercial disappointment at the time of its initial publication in 1948; perhaps, as Wouk once claimed, it was swept away by the excitement over 's bestselling World War II novel "".

While writing his next novel, Wouk read each chapter as it was completed to his wife, who remarked at one point that if they didn't like this one, he'd better take up another line of work (a line he would give to the character of the editor Jeannie Fry in his 1962 novel ""). The novel, "" (1951), went on to win the . A huge best-seller, drawing from his wartime experiences aboard minesweepers during World War II, "The Caine Mutiny" was adapted by the author into a Broadway play called "", and was later made into a film, with Humphrey Bogart portraying Lt. Commander Philip Francis Queeg, captain of the fictional DMS "Caine". Some Navy personnel complained at the time that Wouk had taken every twitch of every commanding officer in the Navy and put them all into one character, but Captain Queeg has endured as one of the great characters in American fiction.

He married Betty Sarah Brown in 1945, with whom he had three sons, becoming a fulltime writer in 1946 to support his growing family. His first-born son, Abraham Isaac Wouk, died in a tragic accident as a child; Wouk later dedicated "" (1978) to him with the Biblical words, "He will destroy death forever."

In 1998, Wouk received the . He and his wife currently live in Palm Springs, CA.

In the 1970s, Wouk published his two most ambitious novels, "" (1971) and "" (1978). He described the latter, which included a devastating depiction of the Holocaust, as "the main tale I have to tell." Both were made into hugely popular TV miniseries. Although they were made several years apart, both were directed by and both starred as Captain Victor "Pug" Henry, the main character.

The novels are ingeniously constructed , so absorbing that called them at one point "the war itself." Each has three layers: the story told from the viewpoint of Captain Henry; a more or less straightforward historical account of the events of the war; and, most ingeniously, an analysis by a member of Hitler's military staff, the insightful General Armin von Roon, who would have been a major figure in world history, had only he existed. There are many classic accounts in the novels, but perhaps most interesting are the bombing raid on Germany by British airmen before Pearl Harbor (Captain Henry joins them for a look see), in the first novel, and the Battle of Midway, in the second. The latter contains what one reviewer called a "remarkable roster call of American airmen sacrificed during the battle."

Wouk hired highly qualified young historians to assist him with the research for his later historical novels, and their details are highly accurate. They include putting together the "roster call" of Midway. Experts have described "The Caine Mutiny" as one of the best depictions of daily life aboard a US ship during the Second World War.

Wouk on Zionism
*"Zionism is a single long action of lifesaving, of snatching great masses of people out of the path of sure extinction." ("This is My God," first edition (1959), page 264.)

Mr. Wouk has kept a personal diary since the 1930s. On September 10th, 2008, Mr. Wouk will formally present the Library of Congress with his journals, now numbering over 90 volumes, in a ceremony which will honor him with the first Library of Congress Award for Lifetime Achievement in the Writing of Fiction.

Mr. Wouk often refers to his journals to check dates and facts in his writing, and was hesitant to let the originals out of his personal possession. A solution was arrived at; a scanning service bureau, [http://www.twinimaging.com Twin Imaging Technology] , was selected to scan the entire set of volumes into high resolution .TIFF images and multi-page PDF files.1