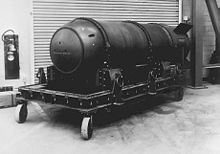 The Mark 15 is widely described as a transitional design between fission and thermonuclear weapons. The Mark 15 was a staged weapon (see Teller-Ulam design), using radiation implosion from a fission nuclear primary (Cobra) to implode a secondary stage. Unlike most modern thermonuclear bombs, the Mark 15 used a secondary which was primarily HEU (highly enriched uranium), which generated most of its energy from nuclear fission reactions once the primary imploded it. There was a thermonuclear core which underwent fusion reactions, but most of the energy came from the HEU fissioning. The HEU fission was enhanced by fusion stage neutrons, but would have generated a very significant fission yield by itself.

Some later bombs used depleted uranium fusion stage tampers, and neutrons from the fusion would fission some of the tamper, but the primary energy release (50% or more) was from the fusion reaction.

The HEU secondary tamper concept may have been used in the most modern nuclear weapons, where compact size and weight were highly valued, including the W88 and W87 Mod 1 weapons.

The Mod 1 corresponds to the Castle Nectar test of the Zombie weapon prototype. This test had a yield of 1.69 megatons.[2][3]

The Mod 2 corresponds to the Redwing Cherokee nuclear test of the TX-15-X1 test model, and had a yield of 3.8 megatons. Redwing Cherokee was the first US thermonuclear bomb airdrop test.[4]

The Mod 3 also appears to have had a 3.8 megaton yield.

A missile warhead variant of the Mark 15, the W15 Warhead, was an ongoing project in the mid 1950s. It was canceled in early 1957. Before cancellation, it had been intended for use on the SM-62 Snark missile. Instead, the Snark ended up using the W39 (see below).

The W39 nuclear warhead and B39 nuclear bomb used a common nuclear physics package which was derived from the Mark 15. The experimental W39 devices were initially tested as the TX-15-X3 (which is identical to the W39 Mod 0 design).

On 5 February 1958, during a training mission flown by a B-47, a Mk 15 nuclear bomb minus nuclear capsule was lost off the coast of Georgia near Savannah. It remains missing despite an intensive search.