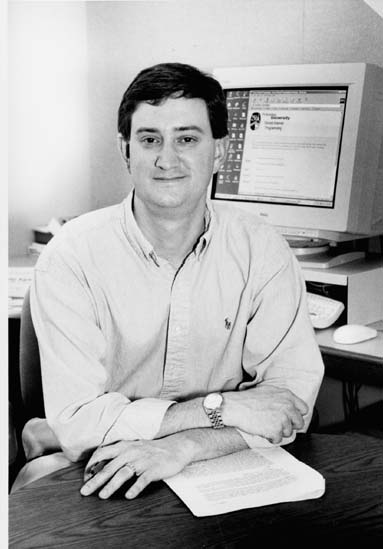 Edward William Felten (born , ) is a professor of and public affairs at .

Felten has done a variety of research, including groundbreaking work on and work on security related to the Java programming language, but he is perhaps best known for his paper on the (SDMI) challenge.

Felten attended the and graduated with a degree in in 1985. He worked as a staff programmer at Caltech from 1986 to 1989 on a parallel supercomputer project at Caltech. He then enrolled as a graduate student in Computer Science at the . He was awarded an degree in 1991 and a in 1993. His Ph.D. thesis was on developing an automated protocol for communication between parallel processors.

In 1993, he joined the faculty of in the Department of Computer Science as an Assistant Professor. He was promoted to Associate Professor in 1999 and to Professor in 2003. In 2006, he joined the , though computer science remains his home department. In 2005, he became the Director of the Center for Information and Technology Policy at Princeton. He has served as a consultant to law firms, corporations, private foundations, and government agencies. His research involves computer security, and technology policy. [cite web
url = http://www.cs.princeton.edu/~felten/FeltenCV.pdf
title = Edward Felten's Curriculum Vitae
accessdate = 2008-05-19
last = Felten
first = Edward
authorlink = Edward Felten]

Felten was a witness for the United States government in , where the softwarecompany was charged with committing a variety of antitrust crimes. During the trial, Microsoft's attorneys denied that it was possible to remove the web browser from a equipped computer without significantly impairing the operation of Windows.

Citing research he had undertaken with Christian Hicks and Peter Creath, two of his former students,

Microsoft argued that Felten's changes did not truly remove Internet Explorer, but only made its functionality inaccessible to the end user by removing icons, shortcuts and the iexplore.exe executable file, and making changes to the system registry. This led to a debate as to what exactly constitutes the "web browser," since much of the core functionality of Internet Explorer is stored in shared s, accessible to any program running under Windows.

Microsoft also argued that Felten's tool did not even completely remove web-browsing capability from the system, since it was still possible to access the web through other Windows executables besides iexplore.exe, such as the Windows help system.

As part of a contest in 2000, (Secure Digital Music Initiative) invited researchers and others to try to break the watermark technologies that they had devised. In a series of individual challenges, the participants were given a sample audio piece, with one of the watermarks embedded. If the participants sent back the sample with the watermark removed (and with less than an acceptable amount of , though this condition was not stated by SDMI), they would win that particular challenge.

Felten was an initial participant of the contest. He chose to opt out of agreements that would make his team eligible for the cash prize. Despite being given very little or no information about the watermarking technologies other than the audio samples, and having only three weeks to work with them, Felten and his team managed to modify the files sufficiently that SDMI's automated judging system declared the watermark removed.

SDMI did not accept that Felten had successfully broken the watermark according to the rules of the contest, noting that there was a requirement that the files lose no sound quality. They claimed that the automated judging result was inconclusive as a submission which simply wiped all the sounds off the file would have successfully removed the watermark, but would not meet the quality requirement.

Felten's team developed a scientific paper explaining the methods used by his team in defeating the SDMI watermarks. Planning to present the paper at the Fourth International Workshop of 2001 in Pittsburgh, Felten was threatened with legal action by SDMI,

Felten (with help from the ) sued the groups, requesting a ruling that their publication of the paper would be legal. The case was dismissed for a lack of standing

Felten presented his paper at the security conference in 2001. The Justice Department has offered Felten and other researchers assurances that the DMCA does not threaten their work, and stated that the legal threats against them were invalid.

On , , Felten and two graduate students were able to hack into a Diebold Election Systems (now ) voting machine. Their findings claimed, "Malicious software running on a single voting machine can steal votes with little if any risk of detection. The malicious software can modify all of the records, audit logs, and counters kept by the voting machine, so that even careful forensic examination of these records will find nothing amiss." [cite paper
author = Ariel J. Feldman, Alex Halderman, and Edward W. Felten
title = Security Analysis of the Diebold AccuVote-TS Voting Machine
version =
publisher =
date = ,
url = http://itpolicy.princeton.edu/voting/ts-paper.pdf
format = PDF
accessdate = 2007-05-07]

Today, Felten is an active voice in the area of technology policy, having started the Freedom to Tinker weblog and testifying before Congress on issues.

The started when it was discovered on , that Sony's XCP software on the CD "Get Right With The Man" by contained hidden files that could damage the operating system, install and make the user's computer vulnerable to attack when the CD was played on a Microsoft Windows-based PC. Sony then released a software patch to remove XCP. On , , it was discovered that Sony's method for removing XCP copy protection software from the computer makes it more vulnerable to attack, as it essentially installed a in the form of an control used by the uninstaller, left on the user's machine and set so as to allow any web page to execute arbitrary code without any need to to the machine or request the user's permission. Felten and graduate student , who explored the removal program, said

The consequences of the flaw are severe, it allows any Web page you visit to download, install, and run any code it likes on your computer. Any Web page can seize control of your computer; then it can do anything it likes. That's about as serious as a security flaw can get. [cite web
url = http://www.freedom-to-tinker.com/?p=927
title = Sony’s Web-Based Uninstaller Opens a Big Security Hole; Sony to Recall Discs
accessdate = 2007-05-07
last = Felten
first = Edward
authorlink = Edward Felten
coauthors = Alex Halderman
date = ,
publisher = Freedom to Tinker]

In February 2008, Felten was involved in research into the .