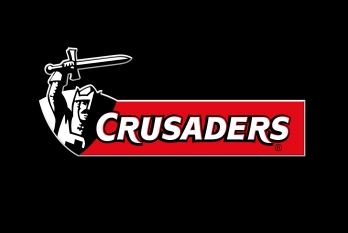 founded = 1996
region = Canterbury Tasman West Coast Marlborough & Nelson
ground =
capacity = 41,500The Crusaders (formerly the Canterbury Crusaders) are a team based in that compete in the (formerly the Super 12). They are the most successful team in Super Rugby history. The franchise represents the Buller, Canterbury, Mid-Canterbury, South Canterbury, Tasman, and West Coast provincial rugby unions. Their main home ground is , formerly Jade Stadium and Lancaster Park.

Formed in 1996 to represent the upper of New Zealand in the Super 12, the team struggled in its first season and finished last. Their performance improved in 1997 and the team finished sixth (out of twelve teams). The team went on to win all three titles from 1998 to 2000 despite each final being played away from home. They again won the competition in 2002 after going through the season unbeaten. In the following two seasons, they again reached the final, although they were beaten on both occasions. 2005 was the last season of the Super 12 before its expansion. After finishing top of the table in that season, the Crusaders went on to host the final in which they defeated the Waratahs. As a result of winning their fifth Super 12 title, the Crusaders were given the trophy to keep. In 2006, the Crusaders hosted the Hurricanes in the inaugural Super 14 final and won 19&ndash;12. In 2008 the Crusaders hosted the final at AMI Stadium against the Waratahs, and won the match 20&ndash;12 to claim their seventh title.

The following season saw a change in captain and coach, with succeeding Loe as captain and Wayne Smith taking over as coach. With five wins, the team finished the round-robin stage in sixth place.

The Crusaders won their first title in 1998, despite starting the season with three losses in their first four games. They finished the round-robin by winning their last seven games, culminating in a last-round win over the Coastal Sharks (now the Sharks) that gave them second place in the round-robin phase of the competition.

In the final at , the Crusaders faced the Blues, who were heavy favourites. According to Crusaders' hooker , "If we'd been polled in that week, and had to give an honest answer, most of the boys, deep down, would probably have thought that the Blues would beat us."

The 1999 season was equally successful for the Crusaders despite struggling to make the play-offs in fourth place after winning their last four round-robin matches.

Following the All Blacks' semi-final loss in the 1999 , Wayne Smith succeeded John Hart as All Blacks coach.

After winning three consecutive Super 12 titles, the Crusaders finished tenth in 2001 — their worst finish since 1996. The season was the last for captain Todd Blackadder before he left to play for Edinburgh in . [Before leaving for Scotland, Blackadder led the Canterbury NPC team to victory in the 2002 National Provincial Championship.]

The Crusaders bounced back dramatically in 2002 when they went through the Super 12 season unbeaten, achieving their fourth title. Although the Crusaders won all eleven of their round-robin matches, six of them were won by a margin of seven points or less. [Seven points is significant because it is the value of a converted try]

The Crusaders met the Highlanders in their 2002 semi-final, which they eventually won 34&ndash;23 after being ahead 18-6 at half time. The following week, they faced the Brumbies in the first final to be hosted at Jade Stadium. The Brumbies trailed 11&ndash;3 after the first half, having had only 30 per cent possession.

The Crusaders' winning run finally came to an end when they were beaten 39&ndash;5 by the Blues in the third round of the 2003 Super 12 season.

The Crusaders' 2004 season began with two losses: first to the Waratahs, then to the Blues.

The 2005 season started with a repeat of the previous year’s final: a Brumbies victory over the Crusaders in Canberra.

As a reward for their seventh finals appearance and fifth title, the Crusaders were allowed to keep the Super 12 trophy.

In 2006, the Super 12 expanded to form the Super 14 when the from Perth, , and the from the Free State and s, joined the competition. An unbeaten run of sixteen matches was nearly halted when the Crusaders drew with the Western Force in Perth in round eleven.

In the season, seven Crusaders players missed the first seven rounds of the competition to participate in an All Black "conditioning programme".

The Crusaders were top of the table going into the last round of the Super 14 before the play-offs. In order to guarantee a home semi-final they needed to defeat the Chiefs at Jade Stadium. The Chiefs won 30-24 - and ended the Crusaders 26 game winning streak at home.

The 2008 season was another highly successful one for the Crusaders.Finishing top of the table at the end of week 14, they comfortably defeated the Hurricanes 33-22 (although the scoreline did not reflect their dominance in the game) in the semi-final and went on to beat the Waratahs in the final 20-12. It was a fitting way to send off long-serving coach Robbie Deans as he headed to Australia to coach the Wallabies (the national rugby union team). It was also the last game for Crusaders stalwarts Caleb Ralph (a former All-Black wing, and versatile utility back player) and former captain Reuben Thorne (former All Black captain and one of the few players present in each of the Crusaders' final appearances). In late July, 2008 it was announced that former All Black and Crusaders captain will take over as head coach for the 2009 season. Blackadder will be assisted by former All Black and Crusaders teammates and .

The Crusaders' name was chosen to reflect the crusading nature of Canterbury rugby.

The Crusaders' main home ground is the 36,000-capacity AMI Stadium in Christchurch, with plans being made to expand its capacity to 43,000 in time for the .

The Crusaders' management proposed playing a 2005 regular season match in when Jade Stadium was unavailable.

The Crusaders have won five of the ten Super 12 competitions, and lost another two finals.

Team of the decade

The most notable omissions from the team were Daniel Carter, Richard Loe, and Reuben Thorne. Daniel Carter was omitted due to the strength of Andrew Mehrtens and Aaron Mauger who occupied the first and second five-eighth positions respectively, and because he was regarded as "the star of the next decade". Despite being considered one of Canterbury's best ever props, Richard Loe missed out as he was only in the team for the unsuccessful 1996 season. The former All Black captain Reuben Thorne was omitted due the quality of players in the lock and blindside flanker positions. The most unlikely inclusion was for at right wing. Berryman was picked over Marika Vunibaka and Afato So'oalo due to his crucial tries late in the 1998 and 1999 seasons that helped the Crusaders qualify for the semi-finals. The team:

The Crusaders were coached in their first season by Vance Stewart, who was assisted by Aussie McLean. Stewart was replaced by Wayne Smith in 1997; McLean too was replaced, by Peter Sloane. Smith continued as coach until he was appointed All Blacks coach after the 1999 season. Robbie Deans took over the reins for the 2000 season, and has been in charge ever since. Deans has had several assistants: in 2000 and 2001 his assistant was ; in 2002, Colin Cooper; in 2003 and 2004, Don Hayes; and in 2005 and 2006, Vern Cotter. Deans' assistant for the 2007 season was former Crusader Mark Hammett.