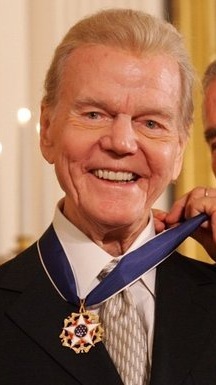 Paul Harvey Aurandt (born , ), better known as Paul Harvey, is an American broadcaster for the ABC Radio Networks. He broadcasts "News and Comment" on weekday mornings and mid-days, and at noon on Saturdays, as well as his famous "The Rest of the Story" segments. His listening audience is estimated at 22 million people a week. Harvey likes to say he was raised in radio newsrooms.Fact|date=September 2008

The most noticeable features of Harvey's idiosyncratic delivery are his dramatic pauses, quirky intonations and his folksiness. A large part of his success stems from the seamlessness with which he segues from his monologue into reading commercial messages. He explains his enthusiastic support of his sponsors as such: "I am fiercely loyal to those willing to put their money where my mouth is."Fact|date=September 2008

On September 12, 2008, after the death of George Putnam, Harvey became the oldest syndicated radio personality in America.Fact|date=September 2008

Paul Harvey, born and raised in Tulsa, , made radio receivers as a boy. In 1933, at a high school teacher’s suggestion, he started working at KVOO in Tulsa, where he helped clean up and eventually was allowed to fill in on the air, reading commercials and news.

Later, while attending the , he continued working at KVOO as an announcer, and later as a program director. Harvey spent three years as a station manager for a local station in Salina, . From there, he moved to a newscasting job at in , then moved on to KXOK, in St. Louis, where he was Director of Special Events and also worked as a roving reporter.

In 1940, Harvey moved to to cover the as it concentrated its fleet in the Pacific. He was returning to the mainland from assignment in Hawaii when the ese attacked . Harvey served briefly as an enlisted man in the during World War II from December 1943 until March 1944. He was given a discharge for after admitting to stealing an airplane. [William Brashler, "Paul Harvey, The Rest of the Story," "Esquire", November 7, 1978, page 57601]

After leaving military service, Harvey moved to , where in June 1944, he began broadcasting from the ABC affiliate WENR. He quickly became the most popular newscaster in Chicago. In 1945, he began hosting the postwar employment program "Jobs for G.I. Joe" on WENR. Harvey added "The Rest of the Story" as a tagline to in-depth feature stories in 1946. The spots became their own series in 1976. On , the ABC Radio Network debuted "Paul Harvey News and Comment" "Commentary and analysis of Paul Harvey each weekday at 12 Noon". Paul Harvey was also heard originally on Sundays. The first Sunday program, was Mr. Harvey's introduction on April 1st. Later the Sunday program would move to Saturdays. The program has continued ever since.

From the late 1960s through the early 1980s, there was a televised, five-minute editorial by Paul Harvey that local stations could insert into their local news programs, or show separately. On , , ABC Radio Networks premiered "The Rest of the Story" as a separate series which provided endless surprises as Harvey dug into stories behind the stories of famous events and people. Harvey's son, a concert pianist, created and produced the series. He remains the show's only writer.

In late 2000, Harvey signed a 10-year, $100 million contract with ABC Radio Networks. A few months later, he was off the air after damaging his . He returned in late August 2001.

Harvey's "News and Comment" is streamed on the twice a day. Paul Harvey News has been called the "largest one-man network in the world," as it is carried on 1,200 radio stations, 400 stations around the world and 300 newspapers. His broadcasts and newspaper columns have been reprinted in the more than those of any other commentator.

Harvey's on-air persona mirrors that of sportscaster . During the 1940s, the famed Stern's "The Colgate Sports Reel" and newsreel programs used many of the techniques later used by Harvey, including the style of delivery and the use of phrases such as "Reel Two" and "Reel Three" to denote segments of the broadcast — much like Harvey's "Page Two" and "Page Three". The discovery of many of Stern's old programs on s have led many to believe that much of Harvey's broadcasting style is based on Stern's work, including most notably the "Rest of the Story" feature, which is a direct parallel to a technique used weekly by Stern. Stern introduced his version of the feature with a that the stories might not be true; Harvey, however, has asserted that his tales have been authenticated. However, a major debunking site blames Harvey for the creation of various rumors and urban legends.

Harvey is also known for catch phrases that he uses at the beginning of his programs, like "Hello Americans, I'm Paul Harvey. You know what the news is, in a minute, you'll hear the rest of the story." And "Paul Harvey News and Comment, and this is...(Day of the week)." At the end of the program, "Paul Harvey... Good "day"."

On he received an honorary degree from Washington University in St. Louis.

In 1921, when Harvey was three years old, his father, Harry Harrison Aurandt, was murdered. Aurandt, born in in 1873,

The four robbers were identified by the surviving detective, and arrested the day after Aurandt died. A lynch mob of 1,500 people formed at the jail, but all four were smuggled out, tried, convicted, and received life terms.

In 1940, Harvey married Lynne Harvey ("née" Cooper) of St. Louis. Lynne Harvey was a member of at Washington University in St. Louis and was a former schoolteacher.Fact|date=May 2008 Harvey himself was a member of at in Missouri. They met when Harvey was working at KXOK and Cooper came to the station for a school news program. Harvey invited her to dinner, proposed to her after a few minutes of conversation and from then on called her "Angel," even on his radio show. A year later she said yes. The couple moved to Chicago in 1945.

On , , Harvey told his radio audience that Angel had contracted . Her death, at the age of 92, was announced by on . [ [http://canadianpress.google.com/article/ALeqM5hcah8HiVRxsIobEasX1zuukq2OQQ Radio commentator Paul Harvey's wife Lynne Cooper Harvey dies at age 92] . . 4 May 2008.] When she died at their River Forest home, the "Chicago Sun-Times" described her as, "More than his astute business partner and producer, she also was a pioneer for women in radio and an influential figure in her own right for decades." According to the founder of the , Bruce DuMont, "She was to Paul Harvey what Colonel Parker was to Elvis Presley. She really put him on track to have the phenomenal career that his career has been."

Lynne Harvey was the first producer ever inducted into the , and had developed some of her husband's best-known features, such as "The Rest of the Story." While working on her husband's radio show, she established 10 p.m. as the hour in which news is broadcast. She was the first woman to receive a lifetime achievement award from the Chicago chapter of .