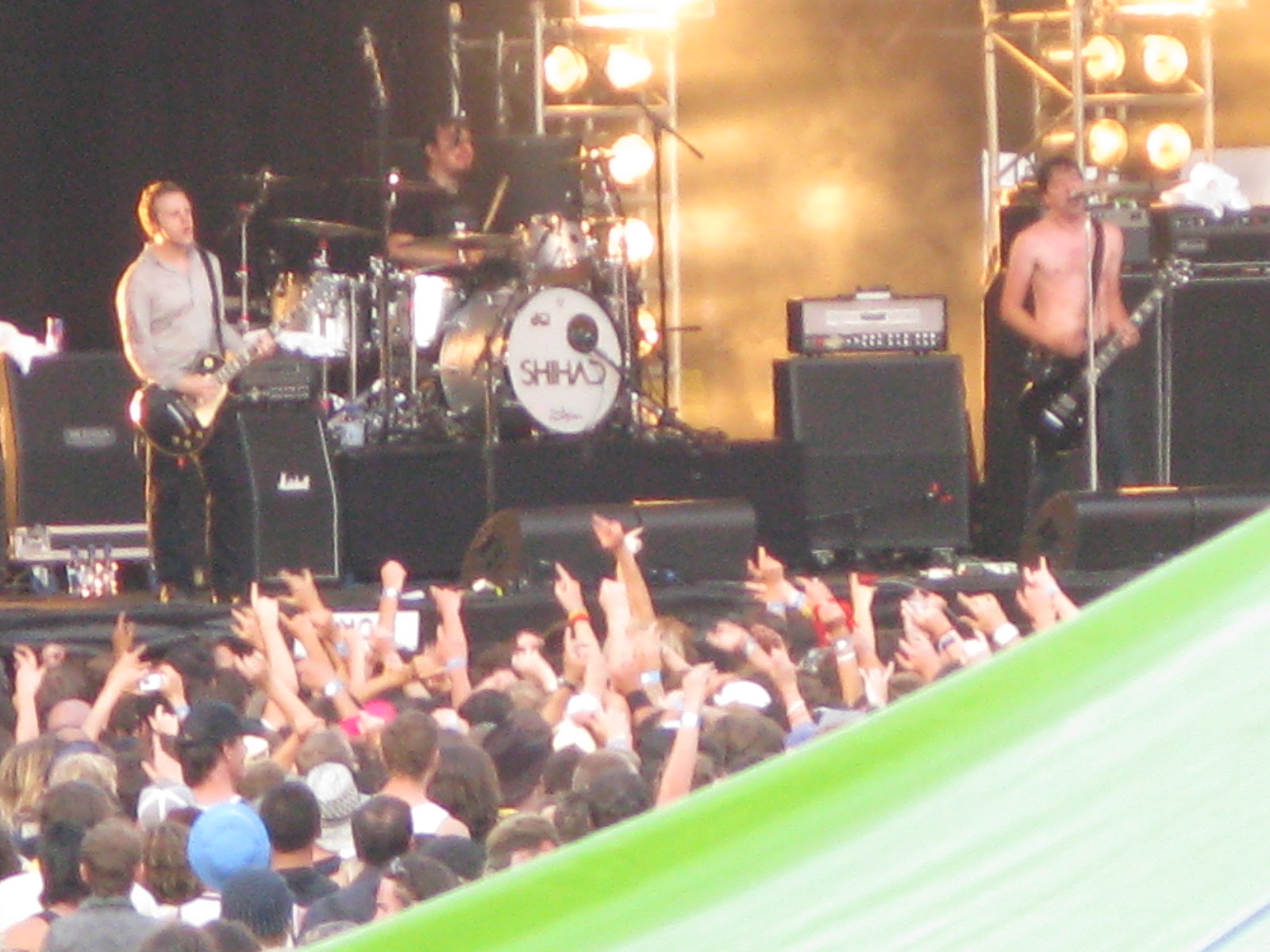 Shihad is an band with elements of , from . Formed in 1988 by vocalist Jon Toogood and drummer Tom Larkin, who were still in school at the time. In 1999 the band relocated to , , where all four members currently reside. The band has produced three #1 and four top 10 singles in their home country of .

Shihad was formed by vocalist Jon Toogood and drummer Tom Larkin whilst still in school, in 1988.

Shihad supported "Love Is the New Hate" initially with dates in New Zealand, including the massive launch concert in 's , to celebrate the start of NZ Music Month, and an extensive tour of and , including a spot on the main stage at in front of an estimated 20,000 people. In August and September 2005, Shihad performed a seventeen date co-headlining tour of with Australian band Cog, dubbed "The Homeland Security Tour".

Shihad were on a New Zealand tour with the during the Christmas/New Year period 2006/07.

Shihad's latest album, "", was released on to good reviews and sales. In New Zealand the album went gold on its first day of release and debuted at number one on the charts. The material on the album is a lot more mellow than that of their previous album "".

The band embarked in February and March 2008 on a headlining national tour entitled 'One Will Hear The Tour' playing for 300-400 capacity crowds along the East coast. They band played 28 dates in 6 weeks.

Shihad played at Big Day Out 2008 in Auckland, New Zealand on the blue stage with an hour slot from 7:00pm – 8:00pm. They also headlined the rock stage of Vodafone Homegrown on at the Wellington waterfront.

In the second half of 2008, Shihad are touring New Zealand on the "Beautiful Machine Tour", playing medium-size venues such as the , with support from and Luger Boa. Shihad are also touring with around Australia for Gyroscope's "Australia Tour".

The name "Shihad" was chosen after members of the band heard the Fremen name for the Sandworms in the 1984 film, "Dune".Fact|date=November 2007 Following the September 11 terrorist attacks, the band decided to change their name due to the similarity between the band's name Shihad and the Arabic word "jihad". At the 2002 music festival in , they released t-shirts with 'Shihad' on them, and 'Remote' below, indicating that 'Remote' was to be the new name. However, due to this name being taken already, they settled on "Pacifier", which was a successful single from their "". They released an album, Pacifier, under this name in 2002.

On , the band announced to the world that they would change their name back to Shihad. To quote the band, "The events surrounding the name change and our choice to be known as Pacifier are well documented. As much as we believed in what we were doing, and the reasons for doing it at the time – the truth is we were wrong." On an appearance on the ABC TV show , Jon Toogood talked about how band members don't usually have to consider holy war when thinking of a band name.

In an interview, [http://www.stuff.co.nz/stuff/0,2106,3264255a4500,00.html] spoke about an event that contributed to their decision:cquote|We were in America while it invaded Iraq and had to play at festivals that were supposedly 'support the troops festivals' when we didn't believe in the war at all. That's what the song "All the Young Fascists" is about – the day we played in front of 30,000 kids at this festival that was originally just a . A week out, just because of the timing, it was turned into the support the troops show and it was being live to Iraq. We were on this bill with these really ugly – what we call WWF – metal bands, and we were shitting ourselves.

I just wanted to get out of there. Beside the stage was a gun alley where kids were lining up to shoot effigies of , and (French president) . That was the weirdest one. The amount of times I actually pointed out to Americans the fact that their was a gift from the French and they were supposed to be mates.

The band name "Pacifier" was immediately raffled on the Australian radio station by and was claimed by a little known band from , Theory of Everything.

Shihad's music has always been rooted in metal. The album "Churn" has a pronounced industrial influence, though "Killjoy" is considered their heaviest release, with heavy distorted riffs. The self-titled "Shihad" (a.k.a. the Fish Album) has a softer sound, which is largely made up of post-grunge and stadium rock riffs, while "The General Electric" incorporates a lot of electronics. "Pacifier" can easily be considered , but "Love is the New Hate" is a shift to more alternative and . Their new album, "Beautiful Machine", is their softest and most melodic release yet, even more so than "Shihad".