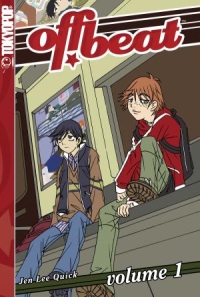 "Off*beat" is an authored by Jennifer Lee Quick, first released , .

Set in , , "Off*beat" follows the exploits of Christopher "Tory" Blake, a bright and disenfranchised fifteen year-old who amuses himself by taking endless notes in a notebook about what he sees and hears each day. Usually a loner, Tory becomes infatuated with the boy who moves in next door in the middle of the night, and devotes all his time to learning what the new boy, Colin Stephens, is hiding.

While living in Queens, New York, Jennifer Lee Quick began drawing up ideas for "Off*beat". A BFA in animation, she approached Tokyopop when the company was doing portfolio reviews for students and graduates at the . Originally, she had intended for the manga to be a joint project with her best friend, , but Quick was forced to fly solo due to conflicts with Cloonan's schedule.

"They liked what they saw, and asked me to send them a pitch sometime. At the time, I was working on "Once in a Blue Moon" so I didn't have time to send a pitch. When I finished that project, my long time best friend, Becky Cloonan was contacted by Tokyopop to send a pitch proposal. I remembered that I had been asked to send one as well, so we briefly considered sending a joint proposal for "Off*beat" (at the time she had talked about possibly working on the project with me). Her schedule got booked though, so I wasn't sure about submitting the pitch on my own. She encouraged me to go ahead though, so I went for it."

It was during September 2004 that Quick officially began working with Tokyopop on bringing "Off*beat" to shelves, having decided that there would only be three books in her series, making it the shortest story she has ever conceived.

"I thought I would like to write a story that takes place in the city but without trying to be gritty/edgy, or overly glamorized...Something kind of everyday but a bit quirky and fun."

In an early conception of the story, all characters wore school uniforms. [cite web|author=Quick, Jennifer Lee|url=http://www.deviantart.com/deviation/42498592|title=offbeat early days|accessdate=2006-11-04|date=] The names of the s were selected arbitrarily, but their birthdates were meant to be somewhat methodical.

The first chapter of Volume 1 was previewed in a 2005 edition of Tokyopop's quarterly Manga magazine (then known as "Takuhai"). [cite web|author=Quick, Jennifer Lee|url=http://wulfmune.deviantart.com/journal/6327360|title=online preview|accessdate=2007-01-24|date=] A live presentation of the same chapter is also available through Tokyopop's Manga Online feature, Mangapods, though Quick herself denies being part of the project due to lack of communication. [cite web|author=Quick, Jennifer Lee|url=http://www.deviantart.com/deviation/35488834/?offset=30|title=shorts|accessdate=2006-06-28|date=]

"Off*beat" is hand-drawn by Quick on bristol paper with mechanical pencil, micron pens, india ink and brush. [cite web|author=Quick, Jennifer Lee|url=http://www.deviantart.com/deviation/17105045/?qo=24&q=by%3Awulfmune+in%3Ascraps&qh=sort%3Atime|title=offbeat page002|accessdate=2007-01-27|date=] Initially, toning was done by hand, but issues with moiré led Quick to screentone using , with each page checked by her editor in light of persistent problems.

Much of "Off*beat"'s tone is derived from its relation to . The fictional version of that Quick has constructed is incredibly rich in detail, with attention to minuscule factors such as street addresses and subway/bus commute schedules.

"It features a spot-on, great depiction of New York. Everything "Fake" does wrong with setting, this does right. The location sets a brilliant backdrop for a really great story with a smart Walter Mitty twist, and cute guys to boot! It's truly manga with an American sensibility. The character designs are unique and appealing, the romance is sweet and understated, and it actually looks like Queens, which makes me really happy."

The realism of the manga is counterbalanced by the presence of fantasy-style elements, owing to the author's desire to experiment in the drawing style and expand herself as an artist in hopes of one day publishing something exclusive to the genre. Cutaways and s are usually employed for this purpose, differentiated from regular panels by a black background (as opposed to white), and range from representations of the of and Western shootouts, to lab experimentation in .

"Off*beat" is divided into chapters. Each volume is made up of six cumulative chapters (i.e. Chapter 6 carries over from Volume 1 into Chapter 7 at the beginning of Volume 2). Preceding the very first chapter of the series is a short prelude which establishes Tory's overanalytic attitude and motivation, with Chapter 1 leaping a time span of 347 days. [cite book|title=Off*beat Volume 1|pages=p. 12] Several chapter headings and pages not directly linked to the storyline make use of monochromatic versions of "Off*beat" illustrations that Quick has produced independent of her work on the manga.

Christopher "Tory" Blake:Born , and named after his hated father who left the family, [cite book|title=Off*beat Volume 2|pages=p. 23-25] Tory is an asocial self-proclaimed genius with a photographic memory, adept at playing arcade games. [cite book|title=Off*beat Volume 2|pages=p. 135] So unchallenged by academics that he resorts to other means of exhausting his energy, he is overly obsessive when something or someone catches his interest, and keeps tabs on every event he deems significant in his life, recording the exact time (down to the minute or second) and place in which they occur. When Colin moves into the apartment across the street, he instantly becomes hooked on tracking his every move. He chases after Colin, blinding himself with the prospect of uncovering his secrets; he is unwilling to admit to himself the circumstances surrounding his feelings towards the other boy.

Colin Stephens:Born , in to a British father and mother, [cite web|author=Quick, Jennifer Lee|url=http://wulfmune.deviantart.com/journal/9394522/?offset=40|title=off*bits|accessdate=2006-05-06|date=] Colin is an extremely quiet, mysterious, and cold boy who moves into the apartment (346 68th St., Woodridge, Queens, New York) across the street from Tory, Saturday , , between 12:14 AM and 1:25 AM. His success in school is mediocre despite study, and he often skips classes, adding to his already poor reputation among teachers and students alike. He lives a secluded life, only leaving his home to go to church and to travel. He suffers from an ailment that causes intense coughing and shivering that may or may not be related to his involvement in the Gaia Project. Though he rejects Tory and Mandy's attempts to help him during a relapse of his condition, he eventually becomes close friends with the two during their peer tutoring sessions. He owns approximately seven cats. [cite book|title=Off*beat Volume 2|pages=p. 155]

Amanda "Mandy" Townslan:An outgoing, popular, and gossipy girl at St. Peter's who is in the same science and P.E. classes as Tory and Colin. She has an affinity for withdrawn individuals, which leads her to befriend the two boys, always willing to lend a sympathetic ear. She has trouble in physics class, but does well in social studies and history. A vegetarian, Mandy supports and hopes to find a career in . She also enjoys meddling in Tory and Colin's relationship. Her two close friends, Amy and Mira, believe that she has strange tastes in regards to the boys she hangs out with. [cite book|title=Off*beat Volume 1|pages=p. 24, 59]

Mary Grace Blake:Tory's overprotective single mother. She is the head of the graphic design department of a small advertising agency where she works, and is the owner of the apartment duplex where she and her son live together. She is mild-mannered and does not become infuriated by the fact that Paul steals food from their fridge, but worries around the clock about her son.

Dr. Dustin Garrets:Born and raised in , , Dr. Garrets is the American cofounder and present leader of the Gaia Project (launched ), and Colin's guardian.

"Off*beat"'s story begins with Tory's first encounter with Colin. While out running errands, he catches Colin and Dr. Garrets as they move in across the street. Almost a year later, Tory convinces his mother to pull him from public school and send him to St. Peter's, where he expects to be more academically challenged. This is, however, merely an orchestration to get closer to Colin, who also happens to attend the same institution.

While Tory generally has an over-active imagination, Colin truly has secrets to conceal. After bribing Paul into tracking down a license plate number for him, Tory discovers that Colin and his guardian are somehow connected to something known as the "Gaia Project," which may or may not be responsible for episodes of sickness that the boy experiences. Behind the guise of a student council member, Tory offers peer tutoring sessions to students whose conduct is below what is considered acceptable, thereby dragging Colin into his scheme along with his newfound friend, Mandy.

As their study sessions grow more frequent, Colin starts to treat Tory more like a friend. The boys pursue private outings, but their closeness indirectly results in Tory running into trouble with his mother, Paul, and Mandy, though they are ultimately reconciled when Tory admits to errors on his part. Paul's hard drive is mysteriously hacked, but key bits of information concerning the Gaia Project manage to be salvaged. In order to investigate just how much he has unearthed about the Project, Colin steals one of Tory's journals while dining at the Blake household. Puzzled as to why he is drawn to Tory, Colin attempts to determine whether or not Tory has "attunement" after collapsing in a café, then proceeds to voice his own suspicions regarding the other's intentions in returning his journal.

"Off*beat" has been generally well-received by readers. It has received praise for its unique style of art and humour, slow unraveling plot, and has been described as "a wildly imaginative romantic drama, filled with all the hopes, dreams and anxiety of a teenager trying to make sense of his place in the world."

In , "Off*beat" was awarded a silver medal for Best Graphic Novel from ForeWord Magazine.