Sergei Dovlatov on the cover of one of his books 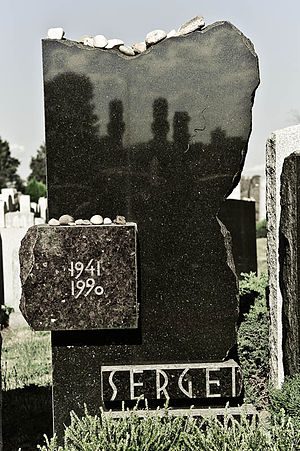 Dovlatov was born on September 3, 1941 in Ufa, Republic of Bashkiria, USSR, where his family had been evacuated during World War II from Leningrad. His mother was an Armenian and his father was half Jewish[1]. After 1945 he lived with his mother in Leningrad (now St. Petersburg). Dovlatov studied at the Finnish Department of Leningrad State University, but flunked after two and a half years. He was drafted into the Soviet Internal Troops and served as a prison guard in high-security camps. Later, he earned his living as a journalist in various newspapers and magazines in Leningrad and then as a correspondent of the Tallinn newspaper "Sovetskaja Éstonia" (Советская Эстония/Soviet Estonia). He supplemented his income by being a summer tour guide in the Pushkin preserve, a museum near Pskov. Dovlatov wrote prose fiction, but his numerous attempts to get published in the Soviet Union were in vain. Unable to publish in the Soviet Union, Dovlatov circulated his writings through samizdat and by having them smuggled into Western Europe for publication in foreign journals; an activity that caused his expulsion from the Union of Soviet Journalists in 1976. The set of his first book was destroyed under the order of the KGB. In 1976, some stories by Dovlatov had been published in Western Russian-language magazines, including "Continent", "Time and us", resulting in his expulsion from the Union of Journalists of the USSR.

In 1979 Dovlatov emigrated from the Soviet Union with his mother, Nora, and came to live with his wife and daughter in New York, where he later co-edited "The New American", a liberal, Russian-language émigré newspaper. In the mid 80's, Dovlatov finally achieved recognition as a writer, being printed in the prestigious magazine "The New Yorker". Dovlatov died on August 24, 1990 in New York and was buried at the Mount Hebron Cemetery.

Sergei Dovlatov published twelve books in the USA and Europe during his twelve years as an immigrant. In the Soviet Union, the writer was known from Samizdat and Radio Liberty. After his death and the fall of the Soviet Union, numerous collections of his short stories were finally published in Russia.

Published during his lifetime:

Joseph Brodsky said of Dovlatov, "He is the only Russian writer whose works will be read all the way through" and that: "The decisive thing is his tone, which every member of a democratic society can recognize: the individual who won't let himself be cast in the role of a victim, who is not obsessed with what makes him different."

"One can revere Tolstoy's mind. Delight in Pushkin's finesse. Appreciate the spiritual quest of Dostoyevsky. Gogol's humor. And so on. Yet Chekhov is the only one I would want to resemble."