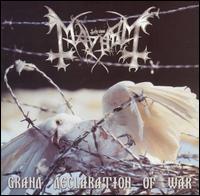 "Grand Declaration of War" (2000) is the third full-length by influential Norwegian band Mayhem. Strongly influenced by progressive and , the album is concept-based, dealing with themes of war and post-apocalyptic destruction. Maniac largely abandons the traditional black metal rasp for dramatic spoken-word monologues on several songs (in fact, track 6, "A Bloodsword and a Colder Sun, Part I of II" is entirely vocal-based with no accompaniment of any kind), and most of the songs segue seamlessly into one another.

Some rejected the album for its avant-garde and electronic elements, which they perceived as bold and pretentious, and criticized Maniac's black metal vocals as being inferior to Dead's and 's. Others saw it as a laudable attempt to recreate and redefine black metal (critic Brian Russ of [http://www.bnrmetal.com BNR Metal] called it "really the first cohesive work the band has ever done" and "a fitting culmination to their career thus far"). In retrospect, the electronic elements of the album were often heavily overstated by its detractors, as they only dominated a single track, "A Bloodsword and a Colder Sun (Part II of II)," and only (with the exception of brief uses of vocal processing) even appeared on a single other track, "Completion in Science of Agony (Part I of II)." Ultimately, the album has more in common with the later works of bands like Arcturus, and than it does with the rest of Mayhem's discography, which may explain why reactions to the album were so polarized; fans expecting a ", Act II" were to be sorely disappointed, which was probably half the point.

"Grand Declaration of War" can be considered a sequel of sorts to the EP "", as the opening track "A Grand Declaration of War" and the second part of "View from Nihil" both incorporate the closing (albeit transposed up by one ) from "Symbols of Bloodswords," that album's closing track. In fact, the album is explicitly labeled as containing "Part II" (tracks 1 through 5) and "Part III" (tracks 6 through 13, which are collectively titled "Il Principe"), with the obvious implication that Wolf's Lair Abyss is Part I.

*There is also a hidden bonus track that can be found by rewinding the CD from the start, it plays Completion in Science of Agony (Part II of II) in reverse.Fact|date=March 2007