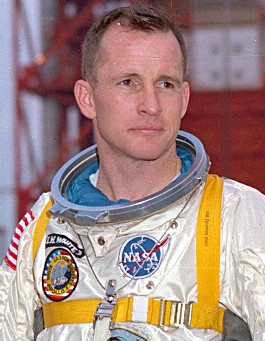 Edward Higgins White, II (Lt.Col , USAF) (, &ndash; , ) was a officer and a . On , he became the first American to conduct a spacewalk. White was killed during the training accident and posthumously awarded the and was previously awarded the for his spaceflight.

He was born in and earned a B.S. from the U.S. Military Academy in 1952, [Prior to establishment of the in 1954, officers in the United States Air Force were drawn from the U.S. Military Academy at West Point and the U.S. Naval Academy at Annapolis.] and an M.S. in aeronautical engineering from the in 1959. He attained the rank of Lieutenant Colonel in the and was a pilot of F-86 and F-100 fighter jets. White was an experimental test pilot for the Aeronautical Systems Division and logged more than 3,000 flight hours, including 2,200 in jet aircraft. He was married to Patricia Finegan White and had two children, Bonnie Lynn and Edward III.

He was chosen as part of second group of astronauts in 1962. Within an already elite group, White was considered a high-flyer by the NASA management. As pilot of , he was the first American to make a spacewalk (on ). During his EVA an extra thermal glove floated away from inside the Gemini spacecraft, which is now a piece of . He was later a backup command pilot for .

White was also made Astronaut specialist for the flight control systems of the Apollo CSM. By the usual process of crew rotation in the Gemini program, White would have been in line for a second orbital flight as Command Pilot of &mdash; making him the first of his group to be selected to fly twice &mdash; but instead was promoted in 1966 to be command module pilot for the first fateful flight .

He died with fellow astronauts "Gus" Grissom and in the fire at , . He was buried with full military honors at and in 1997 was posthumously awarded the . Grissom and Chaffee are both buried in Section 3 of .

* Edward White Hospital in was named in his honor.
* Edward H. White II Park in is named for him. [ [http://www.ci.fullerton.ca.us/depts/parks_n_recreation/find_a_park/list_of_parks.asp City of Fullerton - List of Parks] ] Fullerton has also named parks in honor of Chaffee and Grissom.
* Island White, an in Long Beach Harbor off is named for him.

* The star was named "Dnoces" ("Second", as in "Edward Higgins White the Second", spelled backwards) in his honor.
* White Hill, 11.2 km (7.0 mi) northwest of Columbia Memorial Station on , is named after him as part of the .

* Eight months after his death, in September, 1967, a was issued by the , commemorating White's , the first-ever by an American. [ [http://www.skyimagelab.com/gemspacwal.html Gemini Space Walk ] ] It was the first time in USPO history that the design was actually spread over "two" stamps [http://marshallstar.msfc.nasa.gov/6-6-02.pdf] (one which featured White, the other his Gemini capsule, the two connected by a tether), which was considered befitting the "twins" aspect of the Gemini mission. White's name did not appear on the stamps.

White in the movies