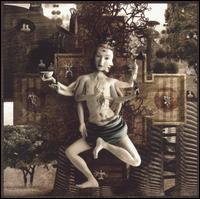 "The Interzone Mantras" (2001) is the sixth album from rock group .Named after ' book of short stories "Interzone" and the band's interest in eastern mysticism and esoteric philosophies

"The last two records, "Transmission" and "Triptych", were very much creations of the studio - meticulously built. With this record we felt that we wanted to put a spark of passion underneath our asses.
"So many people have told us that we're this great live rock band, and I just wanted to see if, as producer, I could capture that on this record. I put us in a rehearsal space, the three of us, faced each other with just guitar, bass and drums - no toys - and, you know, 'let's Rock!'" The new approach fired the band up to such an extent that the album was recorded in just twenty days - "unheard of" for The Tea Party, Martin says.
Martin has special praise for drummer Jeff Burrows, who he proudly proclaims to be "THE best rock drummer going", and who did every drum track in one take.

Lyrically the album draws from the works of modern writers , , , to ancient Greek mythology (Morpheus on "Lullaby"). The lyrics themselves written by Martin when holidaying in , after the music was written from jams in the band's rehearsal space.

The first 100,000 Canadian copies of "The Interzone Mantras" were packaged with a special lenticular cover, with Alessandro Bavari's depiction of moving depending on the viewing angle. Although not as commercially successful as previous albums, "The Interzone Mantras" is The Tea Party's highest charting album in Australia (debuting at #6 on the ARIA chart) and is certified Gold in Canada. It was also nominated for "Rock Album of the Year" at the 2003 .