Mitel is headquartered in Ottawa, Ontario, Canada, with offices, partners and resellers worldwide. 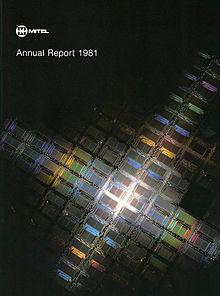 Cover of the 1981 Mitel annual report

Michael Cowpland and Terry Matthews founded Mitel in 1973 (officially on June 8, 1973). Conventionally, its name is regarded as a combination of the founders’ first names and their first product - MIke and TErry's Lawnmowers. However, Cowpland is quoted as stating that it stands for MIke and Terry's Electronics. Whereas Matthews confirmed the lawnmower acronym during an interview on BBC Radio 4's "The Bottom Line" in May 2011. The pair originally intended to sell cordless electric lawnmowers. Their first shipment of three lawnmowers was lost in shipping so they quickly adjusted to produce a telephony tone receiver product (a tone-to-pulse converter for central office use based on Cowpland's Ph.D. thesis). Cowpland has also stated that the lawnmowers were not suited to Canadian lawns.

Following the great success of the tone receiver, the founders extended their interest in the telecommunications industry. Early on they realized the possibilities of the then new technology of microprocessors to change how office telephone equipment was built. With this insight, they introduced the SX200 PBX to an astonishing success. The company grew exponentially at a rate of over 100% per year for several years. They reached the $100 million dollar annual revenue mark by 1981.[2]

In 1976, the company expanded into the semiconductor field with the acquisition of Siltex, a bankrupt ISO-CMOS foundry in Bromont Québec. This evolved into a semiconductor division that specialized in mixed signal and thick film hybrid devices.

The next major product was a large digital PBX called the SX2000. This was an early attempt to integrate the voice and data functions of office systems. It was conceived as moving beyond the PBX to become an Office Controller which would handle both voice and data applications within an organization.

In 1985, due to a financial crisis in the company, the board of directors created enough new shares to sell a controlling interest (51%) to British Telecom. British Telecom left the equipment business a few years later and sold its controlling interest in Mitel to an investment company called Schroeder Ventures. Schroeder Ventures installed new management which revitalized the company.[citation needed]

In the meantime, Mitel continued to diversify its product line, introducing the successful SUPERSET line of phone terminals, the GX5000 Central Office, and the SMART-1 call controller, among others. Additionally Mitel developed and marketed a line of telecom-focussed semiconductor products.

In 2001, Mitel was split into two parts. The PBX division and the company name were sold to co-founder Matthews, who took it private. Matthews purchased 90% of the PBX division for $300 million Canadian with the original company retaining 10%.[citation needed] The PBX division then began a new chapter, under the name Mitel Networks, by developing a family of PBXs based on Internet standards for Voice over IP (VoIP).

The original company retained the semiconductor division. It was renamed Zarlink (Tsar of Links) Semiconductor to reflect its interest in networking.

The intellectual property of Mitel Networks was spun out in 2001 and placed in a company called Mitel Knowledge Corporation.[citation needed] This company evolved into MKC Networks which makes a family of SIP-based IP PBX systems.

On May 10, 2006, the new company announced its intention to IPO. No detailed information was released but the press indicated that the company hoped to raise $150 million.[4]

In April 2007, Mitel announced an agreement with Inter-Tel to purchase that company. This purchase would amount to a merger of equals with the merged company being twice the size of the original Mitel.[citation needed] This acquisition was completed in August 2007. Management had announced that the companies will carry on under the name Mitel. As a result of the merger, Mitel withdrew from the IPO registration process.[citation needed]

Mitel Networks reverted to calling itself Mitel in product branding and marketing materials in 2004.[citation needed]

Note that the separate company known first as "Mitel Knowledge" and now as MKC Networks was never actually a part of Mitel Networks, but was rather a company producing a product intended for sale through Mitel Networks.[citation needed] Both companies were and are ultimately controlled by Terry Matthews.

On April 22, 2010, Mitel became a public company. The company was listed on Nasdaq with the symbol MITL and its initial offering stood at $14 per share. The stock is now trading at less than $5, and was described by CNBC's Cramer as one of the worst IPOs of the year. [5]

During the company's Q1 conference call, Don Smith (CEO) announced his retirement from the company once the board of directors is able to find a suitable replacement. Smith said he would remain on the board, even after retirement.