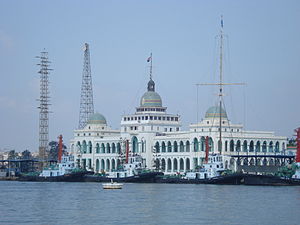 SCA[1] was established by the nationalization act signed on 26 July 1956 by the Egyptian president Gamal Abdel Nasser. The act at the same time nationalized the Suez Canal Company and transferred all its assets and employees to the SCA established by this act.[2]

SCA is an independent authority having legal personality.

Its head office is in Ismailia.

Its Board of Directors comprises 14 persons, including the Chairman & Managing Director.

Chairmen of the Suez Canal Authority

SCA owns the Suez Canal and all areas, buildings and equipment pertaining thereto.

SCA issues the Rules of Navigation, fixes the tolls for the use of the canal and collects them. The tolls are expressed in XDR and collected in USD, GBP, EUR and other currencies. In 2008, the total revenue in tolls was 5,381 mio USD for the passage of a total of 21,415 vessels.

SCA is responsible for the operation and maintenance of the Suez Canal, for the safety of the traffic and for all other matters relating thereto.

According to the nationalisation act, SCA is bound by the Constantinople Convention of 29 October 1888 which grants the right of free access and use of the canal at equal conditions to all ships, commercial ships and ships of war, in times of peace or of war, even to ships of belligerent parties.

SCA is responsible for the computerized traffic management supported by radar, for the 14 pilot stations and their pilots. Since 1996, SCA operates the Maritime Training and Simulation Center for its pilots.

SCA operates some 60 ships and boats, such as tugs, dredgers, cranes, and smaller boats.

According to SCA's web site, its activities also comprise: