The majority of the story takes place in the parallel world of Fantastica (Phantásien in the original German version; referred to as Fantasia in the films), a world being destroyed by the Nothing, which represents and constitutes people's lack of imagination in the real world. The first protagonist is a young warrior, who is asked by the Steward of The Empress of Fantastica, to set off and find a way to stop The Nothing. The other protagonist is a boy from the real world, a reader of the novel with the same title, for whom the story gradually becomes more and more realistic. Like other works by Ende, The Neverending Story is influenced by anthroposophic thought.

The book centers on a boy, Bastian Balthazar Bux, who is neglected by his father (who has sunken into despair after his wife's death) and is bullied by his schoolmates. Whilst running from some of them, Bastian bursts into the antique book store of Carl Conrad Coreander. Bastian steals a book from the store called The Neverending Story which Coreander has been reading; he hides in his school's attic, where he proceeds to read the story through the rest of the day and the night, not realizing that he has effectively become a part of it.

The book begins in Fantastica, when a "will-o'-the-wisp" goes to ask the Childlike Empress for help against the Nothing, which is spreading over the land. The Empress is ill, which is believed to be the cause of the Nothing (or vice versa); she sends the only person that can stop the Nothing, a boy warrior named Atreyu, to find a cure for her. Atreyu is a brave person, being considered a warrior even though he is a young boy of Bastian's age.

While on his quest, Atreyu meets characters such as Morla the Aged One, the incorporeal oracle Uyulala, and the gnomes Urgl and Engywook. Atreyu also meets Falkor, the luckdragon, who helps him along the way. After Atreyu and Falkor get in the way of a fight of the Wind Giants, Atreyu gets thrown off Falkor's back and ends up in Spook City, Atreyu meets Gmork the werewolf, who has been following Atreyu since the early days of his quest, intending to kill him. In the course of his quest, Atreyu learns about the true nature of Fantastica and the Nothing: Fantastica is a representation of the dreams and fantasies of the real world; the Nothing and the sickness of the Childlike Empress are the effects of the lies humans use in their greed for power; it is the denial of dreams and fantasy which is destroying Fantastica. The only thing that can save Fantastica is a human child, who must give her a new name to start again the cycle of life in Fantastica.

Falkor and Atreyu return to the Ivory Tower, where the Childlike Empress lives. But since Bastian, in his lack of confidence, hesitates to take the step into Fantastica, the Childlike Empress confronts him with the fact that whatever he may think, he has already become part of the Neverending Story, and he must carry out his part in it. And Bastian does so by crying out the name he has chosen for the Empress: 'Moonchild'.

Bastian comes to Fantastica and meets the Empress; she asks him to help re-build Fantastica with his imagination, and he subsequently has many adventures of his own in his new world. With the help of AURYN, a medallion that links him to the Empress, that gives him power over all the inhabitants of Fantastica and grants all of the boy's wishes, Bastian explores the Desert of Colors, battles the evil witch Xayide, and meets the three Deep Thinkers. Bastian becomes friends with Atreyu, but as Bastian continues to use the AURYN, every wish he makes takes away one of his memories and he begins to lose his own true self, and thus Atreyu becomes the more worried about him. The growing tension between the two is exploited by Xayide, who drives Bastian to a lust for power. Bastian is defeated in his attempt to have himself crowned as a Childlike Emperor by Atreyu, who leads a rebellion against him. Only when Bastian stumbles into a colony of humans who were trapped in Fantastica after having lost all their memories does he realize what has nearly become of him.

Bastian sets out to find his own true wish - the only thing he can wish for without losing himself. After he loses his remaining memories, Atreyu helps him, and Bastian then has his one true wish fulfilled and manages to cure his father as well. After he returns home, he decides to return the book to its owner, Carl Conrad Coreander, but the book disappears after Bastian returns from Fantastica. He explains this to Carl Conrad Coreander, who is interested in Bastian's adventures - he has been to Fantastica himself once, as it turns out - and asks him to keep in touch to talk about their respective experiences. As Bastian leaves to meet his father, Coreander muses that Bastian will indeed help others to get to Fantastica and help carry over more hopes into the human world.

AURYN is a mystical talisman in The Neverending Story. In the novel, AURYN is always spelled in capital letters and is revered by all Fantasians, referred to as "The Gem" and "The Glory". It is a symbol of its mistress, the Childlike Empress, who is also called "The Golden-Eyed Commander of Wishes" in reference to her relationship with AURYN. While the book makes noteworthy the point that the image of AURYN is on its "cover(s)", it does not actually refer to it as AURYN.

A common misconception is that AURYN is a simple magical object that grants wishes. The truth is that AURYN's power flows from the Childlike Empress and that it can only be used with her permission. The powerful amulet cannot be used against her and if she does not grant the use of it to someone they are unable to influence AURYN. 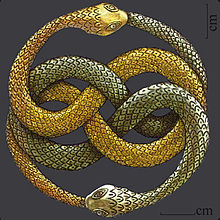 AURYN, as it appears in the movie(s)

The name of the amulet is not the same as that of a simple inanimate object. The word 'the' never precedes that amulet's name (i.e., never "the AURYN"). Instead, it is used simply as AURYN, a proper noun like a person's name.

Two mythological serpents, symmetrical, bite at the other's tails. In the book, they form an oval, not intertwined. One serpent is white and one is black. Each has an eye to correspond to the color of the book's print, red and green. It may be noted that the film version has the two snakes in an "Infinity Knot", a kind of grief knot which looks like a more intricate variation of the figure "8" infinity symbol and another sign of ouroboros. The two snakes represent the dual nature of the two worlds, Fantasia (German: Phantásien) and Reality, but also the twin nature of their mutual creation and destruction. On the back of AURYN are these words:

AURYN helps guide Atreyu through Fantasia in his quest to find a cure for the ailing Childlike Empress, and in turn defeat the Nothing. It serves him clandestinely, but does return him to the Ivory Tower. Although Atreyu believes himself to have failed in finding the human child past the borders of Fantasia, the Childlike Empress informs him to the contrary and that indeed the boy had been with him all along.

In the hands of the Childlike Empress, AURYN displays greater powers even in the face of the Nothing. She releases seven spirits to serve her as she ventures across her tattered realm to find the Old Man of Wandering Mountain. They carry her chariot and provide a haven for Atreyu and Falkor within.

Bastian christens the Childlike Empress with her new name. She presents him with AURYN; her only request being that he follows the instructions written on the back. While it grants him the power to make wishes and imagine more of Fantasia, it drains him of his memories which are his only way back to his world. Bastian searches for the same obscure boundaries of Fantasia, only to realize it is within AURYN itself.

In the mystical interior of AURYN, two gargantuan serpent statues stand sentry, one shining brighter than white, the other darker than black. They guard the Waters of Life, a waterfall and pool that serve as the exit from Fantasia. The statues refuse Bastian's passage, for he had left many stories unfinished in Fantasia. Atreyu, however, agrees to undertake the quest, which allows Bastian to return to his world. When Bastian touches the waters, their truthful properties dissolve the illusion of his glamour wishes, and he returns to being a fat little boy, instead of a Fantasian prince, but this time he has learned to love himself as he truly is. At this point the snakes of AURYN allow him to return to his world.

Susan L. Nickerson of Library Journal writes in a review that "Imaginative readers know the story doesn't end when the covers close; the magic to be found in books is eternal, and Ende's message comes through vividly."[1]

"The two parts of the novel repeat each other", as Maria Nikolajeva states in her book The Rhetoric of Character in Children's Literature, in that Bastian becomes a hero but then in the second half he "acts not even as an antihero but as a false hero of the fairy tale." The characters of Bastian and Atreyu can also be seen as mirror halves.[2]

In September 2003, AVAinternational GmbH began publishing "Legends of Fantastica". Originally planned as a 12 part series of novels, only 6 have been published as of 2004. They are: