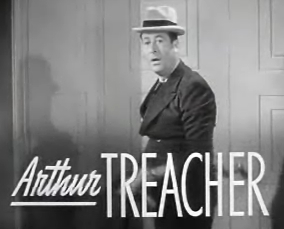 After the war he established a stage career and in 1928 he went to America as part of a musical-comedy revue called "Great Temptations". He began his film career in the 1930s, which included a role in three different films: "Stowaway" (1936), "Heidi" (1937), and "The Little Princess" (1939). Scenes intentionally put the six-feet-four Treacher standing or dancing side-by-side with the tiny child actress, which could only make her cuter. Treacher filled the role of the ideal , and he portrayed 's perfect valet character in two movies, "" (1936) and "Step Lively, Jeeves" (1937). He also played a valet or butler in several other films including: "Personal Maids", "Mister Cinderella", "Bordertown", and "".

Treacher played the role of Constable Jones in "Mary Poppins" and made many guest appearances on U.S. television, in addition to being 's announcer and on the "" from 1965-1970 ("...and now, here's the dear boy himself, Meeeer-vin!") When Griffin switched from syndication to , the network brass insisted that Treacher was too old for the show. Griffin fought to keep Treacher, but eventually relented and announced Treacher's retirement. No replacement was hired.

In 1964 Treacher played the role of Arthur Pinkney in two episodes of the TV series, The Beverly Hillbillies. His role was that of a stuffy English butler who mistakenly believed the hillbillies were the domestic servants of the family he was hired by to improve the quality of the eastates live-in staff, while the hillbillies believed Pinkney to be a boarder at their Beverly Hills Mansion. Once found out that he was at the wrong millionaire's home,it was concluded that Pinkney should remain as the boarder at the Clampet residence in hopes introducing the backwoods family to culture and refinement.

Arthur Treacher's Fish and Chips was also a popular restaurant chain in the 1970s named after him, although it is unclear if he had any financial investment in the chain. The chain continues to exist, though with only 45 franchises left throughout the United States.