University of Waterloo Faculty of Mathematics

University of Waterloo Faculty of Mathematics

The Faculty of Mathematics is one of six faculties of the University of Waterloo in Waterloo, Ontario. As of Fall 2010, it has 5,741 undergraduate students and 629 graduate students, 200 full-time professors, and offers over 500 courses in mathematics, statistics and computer science.

The Faculty also houses the David R. Cheriton School of Computer Science, which was formerly the faculty's computer science department. 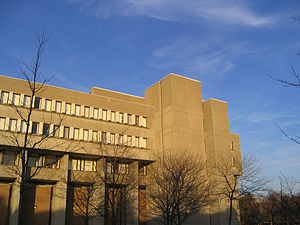 The faculty was founded on January 1, 1967, a successor to the mathematics department in the Faculty of Arts. Initially located in the Physics building, it was moved in May 1968 into the newly-constructed Mathematics and Computer (MC) building.

One of the professors at this school at this time, Ralph Stanton, became legendary among students for wearing gaudy ties. This inspired the students to drape a gigantic pink tie over the MC building on the occasion of its opening, which later became an official mascot of the Faculty. [1]

The faculty presently has four departments: Applied Mathematics, Combinatorics and Optimization, Pure Mathematics, and Statistics and Actuarial Science. Management responsibilities for Waterloo's Software Engineering program are shared between the Mathematics and Engineering faculties.

Undergraduates in the Faculty are frequently colloquially called "Mathies". As the faculty is a large one with many distinct programs, there is no overall cohesive structure to undergraduate student life.

The third floor of the MC building houses some recreational space and offices for student organizations: the Mathematics Society (MathSoc), the primary student organization serving and representing undergraduate math students; mathNEWS, and a number of clubs oriented to specific programs. 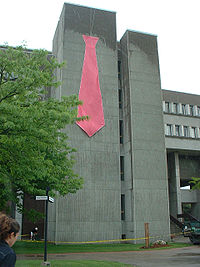 The Tie Guard is a yearly tradition at the University of Waterloo. A group of senior math students volunteer for the position each year, and are selected by the University of Waterloo Federation of Students representatives from the Faculty Of Mathematics. It is expected that the appointed Tie Guard volunteers will be on hand at the guard station 24 hours a day for the duration of the orientation week.

The Tie Guard is located outside the Faculty of Mathematics building every September during orientation week at the university, as well as any special occasions when the faculty mascot is hung, and is there to serve two purposes. Firstly, and according to any mathie student you ask, they are there to guard the Faculty of Mathematics' mascot, a huge 40 foot pink tie which hangs off the side of the building.

Secondly, the Tie Guard acts as a 24-hour first aid station and information centre to support the ongoing activities of the Frosh Week. There is always a member of the Guard present who has been trained in First Aid by a recognized authority such as the St. John's Ambulance or International Committee of the Red Cross. Students from all faculties routinely stop by the guard station to get directions, have questions answered or simply pay homage to the mascot and the Guard.

In truth, it performs both of these tasks largely by its mere presence. By having people present outside the mascot 24 hours a day, it discourages would-be student pranksters from both damaging the tie; or, more likely given the Pink Tie's precarious position on the side of the building, it prevents students from injuring themselves or others in an attempt to capture the mascot.

The Tie Guard was founded in 1994 after several previous attempts on the Pink Tie resulted in both damaged mascots, and injuries to students, the most notorious of which the Tie Liberation Organization (TLO) kidnapping in 1988. According to urban legend at the university, the dean at the time of the last attack in 1993, proclaimed that if there was another incident involving the mascot, it would be taken down and not put up again. Thus it was, that in 1994, The Tie Guard was founded by then student Marco Koechli, who maintained a vigil by himself for the entire week, encouraged by other students and supporters on the Faculty and Dean's office. In more recent years the tie guard has expanded and now several students are appointed to man the Guard each year.