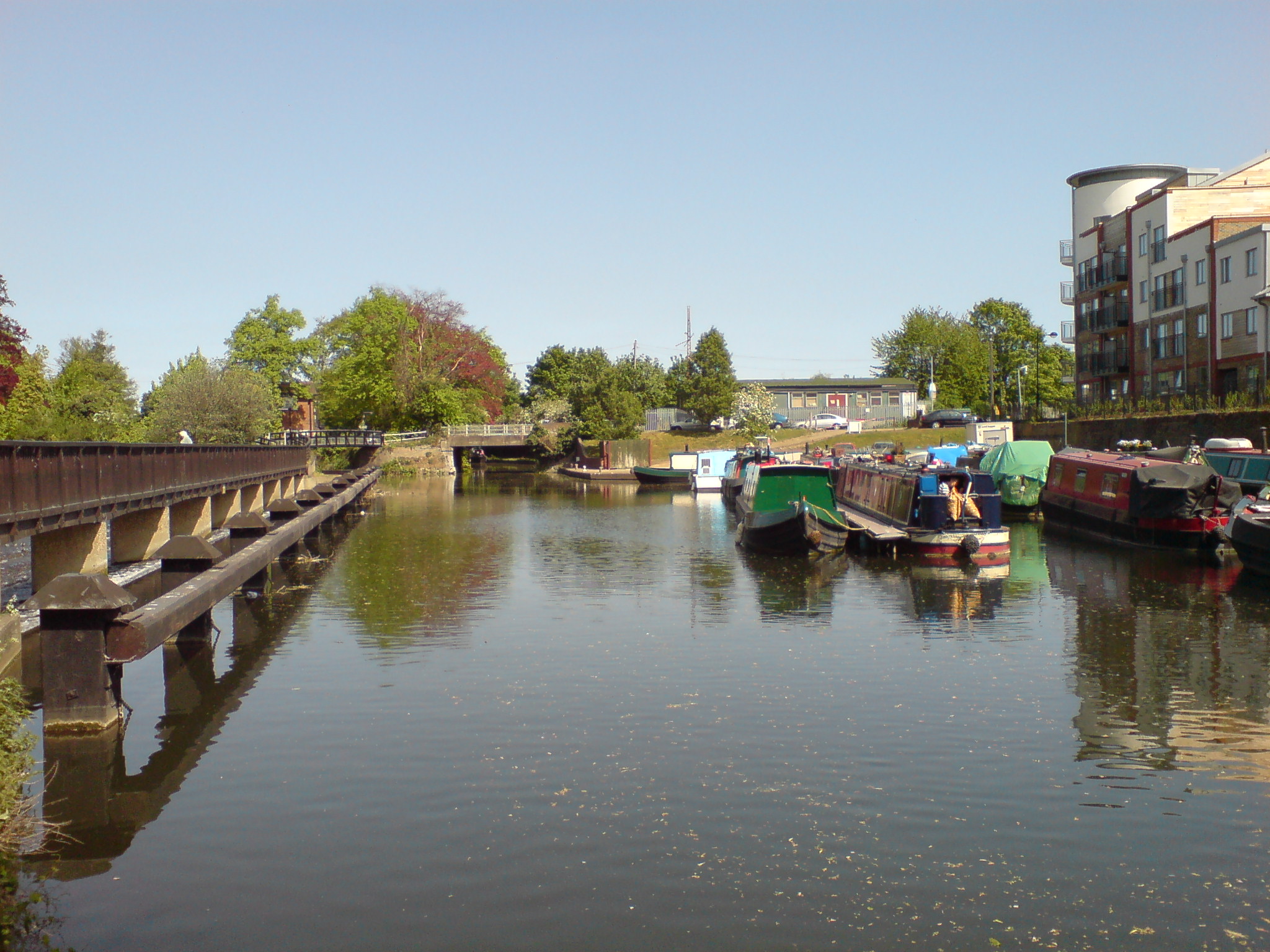 image_size =
image_caption = River Lee at The River Lee or River Lea [Historically, the river has been called the "Lea", "Lee" or "Ley". The "Ley" spelling is seen in mediaeval documents but subsequently passed from common usage. Currently, "Lea" and "Lee" are the generally accepted spellings, with "Lea" used in reference to the original natural river and "Lee" referring to the canalised parts, such as the Lee Navigation. See .] in originates in Leagrave Park coord|51.910338|-0.461233|region:GB|display=inline, , in the and flows generally southeast, east, and then south to where it meets the coord|51.507113|0.009184|region:GB|display=inline, the last section being known as .

The spelling Lea is predominant west (upstream) of , but both spellings are used from to the ; the was established by Acts of Parliament and should be so spelt. However, the variant spelling is used for several locations and infrastructure in the Capital, such as in , and the Lea Valley Railway Lines. The divergent spellings of the river are also reflected in the place-names of and : both mean "farmstead on the River Lea". [cite book |author=Mills, A.D. |title=The Popular Dictionary of English Place-Names |year=1991 |publisher=Phaidon |location=Oxford]

Course of the river

The source is usually said to be at Well Head inside at Common, but there the River Lea is also fed by a stream that starts convert|2|mi|km|1 further west in . The river flows through (or by) , , , to where it changes from a small shallow river to a deep canal at , which then flows on to , , , , Waltham Abbey, , , Edmonton, , , , Stratford, , and finally where it meets the (as ). It forms the traditional boundary between the counties of and , and was used for part of the Danelaw boundary. It also forms part of the boundary between and .

For much of its distance the river runs within or as a boundary to the . Between Tottenham and Hackney the Lee feeds , and (the latter now drained). In their early days, Tottenham Hotspur and Leyton Orient played their matches as football amateurs on the Marshes. South of Hackney Wick the river's course is split, running almost completely in man made channels (originally created to power water mills, the ) flowing through an area that was once a thriving industrial zone.

Inside below the river forms the boundary with the former , now known as , a housing development. Just downstream the river is joined by the . The man-made,concrete banked water is known as the at this point as it passes a series of reservoirs: at /, at Edmonton and the at . At there is a connected set of reservoirs; , , , , and . It also passes the , a restored tidal mill near Bow.

In the , Old Ford, as the name suggests, was the ancient, most downstream, crossing point of the River Lee. This was part of a pre-Roman route that followed the modern , , through to and thence across a causeway through the marshes, known as Slip (now in ). The route then continued through to . At this time, the Lee was a wide, fast flowing river, and the tidal estuary stretched as far as . [ [http://www.british-history.ac.uk/report.asp?compid=22742 'Bethnal Green: Communications', A History of the County of Middlesex: Volume 11: Stepney, Bethnal Green (1998), pp. 88-90] accessed: 15 November 2006] Evidence of a late Roman settlement at Old Ford, dating from the 4th and 5th centuries, has been found.

In 1110, Matilda, wife of Henry I, reputedly took a tumble at the ford, on her way to and ordered a distinctively bow-shaped, three-arched, bridge to be built over the River Lee ("The like of which had not been seen before"), at Bow. During the , , , Old Ford and Bow were the sites of water mills (mainly in ecclesiastic ownership) that supplied flour to the bakers of Stratforde-atte-Bow, and hence bread to the City. It was the channels created for these mills that caused the Bow Back Rivers to be cut through the former Roman stone causeway at Stratford (from which the name is derived).

Improvements were made to the river from 1424, with tolls being levied to compensate the landowners, and in 1571, there were riots after the extension of the River was promoted in a private bill presented to the House of Commons. By 1577, the first lock was established at Waltham Abbey and the river began to be actively managed for navigation.

The New River was constructed in 1613 to take clean water to London, from the Lee and its catchment areas in Hertfordshire and bypass the polluting industries that had developed in the Lee's downstream reaches.

The Waterworks River, a part of the tidal , have been widened by convert|8|m|ft|0 and canalised to assist with construction of the Olympic Park for the . A new lock is being installed on the to maintain water levels on the Lee, within the park at a depth of convert|2|m|ft|0. This will allow access by 350&ndash;tonnes barges to ensure that at least 50% of the material required for construction to be delivered, or removed by water. [ [http://www.london2012.com/documents/oda-publications/demolish-dig-design-update.pdf "Milestone 5"] "demolish, dig, design" January 2008 (The Olympic Delivery Authority) accessed 25 April 2008]

* For a full list of tributaries, please expand the River Lee info box at the bottom of this page.