The first high school classes in Mesa began in September 1899 on the second floor of the red brick north elementary school, later rebuilt and known as Irving School. The first Mesa Union High School district was organized on December 26, 1907, with John D. Loper as superintendent. The Town Council had leased all of Block 20 to the University of Arizona for 99 years to use as an experimental farm. This was the land bounded by Center and Macdonald, Second and Third Avenues. It didn't take long to discover that the block was not large enough, and so, on January 4, 1908, they sold it to the school district for $75. Construction began immediately on the building known as "Old Main". The 1909 graduating class graduated from that original twelve room building. The school had a main floor auditorium with a swimming pool in the basement. The auditorium was used for assemblies, with folding chairs for the early comers and standing room only for the rest. Ten years later, eight more rooms were added plus a small auditorium-gymnasium. During basketball games, spectators sat in the balcony (above the freshman section) or on the stage because the gym was not wide enough for sideline bleachers.[citation needed] 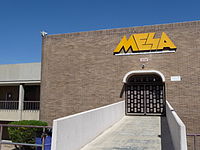 Entrance to the school, adorned by a sign donated by the class of 1998

In September 1932, a football player named Zedo Ishikawa was accidentally killed by a shotgun blast to the chest. As he neared death he said, "Tell Coach Coutchie and the boys to carry on." As time went on, students began repeating the theme "Carry On" to one another. Eventually it became the school's official motto.

In 1936, the WPA and PWA provided funds for new construction, and the New Building was constructed west of the Main Building with an arcade in between. The land for this was purchased from Harvey Bush, for $4000. A new gymnasium building, which included an agriculture shop and auto shop, was also built south of the Main Building — the new site for school dances and basketball games.[citation needed]

In 1967, Mesa won their homecoming football game against rival Westwood High. Then, on Sunday night, October 1, 1967, a disastrous fire started in the science lab, completely destroying the sixty-year-old "Old Main".[1] Classes continued to graduate from the old campus until 1972 when the new Mesa High was built.[citation needed]

AIMS test scores for MHS were below the state average in reading, math, and writing for 2002 through 2004, but they improved to substantially above average for 2005.[citation needed] The average number of students per teacher is 23.[citation needed]

*The Arizona Interscholastic Association recognized these sports and the regular season games thereof as official during these years, but did not conduct playoffs to determine AIA state champions for them until 1959 for football and 1983 for soccer. In such times, the press declared state champions (and state runners-up), similar to how the Associated Press independently crowns national champions for some sports at the college level.

The junior high schools that feed into Mesa High School include:[20]